Today we’re stepping way back into Liverpool’s history, and also seeing how it can tell us something about the city of today. END_OF_DOCUMENT_TOKEN_TO_BE_REPLACED

In advance of the exciting developments in a couple of weeks’ time (more information anon!) I’ve been polishing the Historic Liverpool website, which has become a little neglected of late.

END_OF_DOCUMENT_TOKEN_TO_BE_REPLACED

I’ve been very excited about this for a little while, and though it may be just me who thinks this is cool, I’m pleased to announce the launch of the all-new, polished-and-improved, shiny-swishy Historic Liverpool!

And that’s why I’ve been neglecting this blog for several weeks now. END_OF_DOCUMENT_TOKEN_TO_BE_REPLACED

Quite a short one for you today. I’ve just completed the Historic Liverpool page on the history of Croxteth Park.

The township of Croxteth Park naturally includes most of the park itself, but funnily enough not Croxteth Hall itself. This is still a very wooded area today, and originally was part of the vast hunting forest which stretched from Toxteth to Simonswood. This meant that the area didn’t get built on for hundreds of years, and only really saw development in the 1980s when the estates of Coachman’s Drive and Fir Tree Avenue appeared.

Before then the nearest development was in Gillmoss, which grew from a tiny collection of cottages and farm buildings into a classic example of post-war large scale development.

Even now, Croxteth Park sits on the edge of Liverpool, and remains a ‘green lung’ for anyone in the city to enjoy. 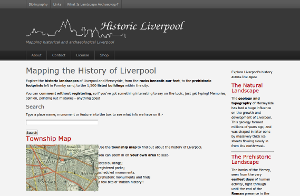 Just thought I’d write a short note to let you know that the appearance of Historic Liverpool has changed!

I’ve changed the colour scheme – the Drupal Theme for those web developers out there – because there were some issues with the last one. I’ve still got to do a bit of tweaking to make sure my particular content fits the new clothes. It’s mostly the same, however, so all the menus and text haven’t changed. 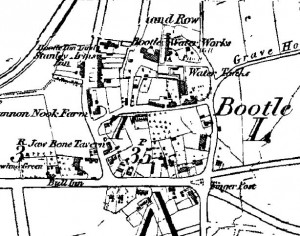 Bootle village in 1851, from the Ordnance Survey 1st Edition

I’ve put the finishing touches to the History of Bootle page today (minus a couple of tweaks here and there). I’m planning on concentrating more on Historic Liverpool over the coming weeks, after being more involved in other projects over the past weeks.

So, if you know anything about Bootle, or there are other pages you want to see on the Historic Liverpool site, drop me a line or fill in the comments form!

Historic Liverpool is all about the historic landscape of Liverpool, rather than the history. So while there are thousands of merry men and women who’ve appeared in the annals of the city over the years, I’ll be concentrating on the built environment – how the city has changed over the years. So I’ll be most interested in comments about buildings – farms, offices, libraries, churches – and landscape features – lakes, ponds, forests, streams, dams – and things like roads and railways. If, of course, you know of great people who’ve shaped the city and its suburbs, and who deserve a place on the site, please do mention them in the comments – I won’t delete anything unless it’s spam!

Bootle’s one of the areas that’s changed the most – from a tiny village (albeit with its own waterworks) through being a seaside resort(!) to an industrial landscape and the modern area of Liverpool it is today.

I’ll be moving on to Childwall next, so if there’s something you’ve been dying to tell about that part of south Liverpool drop me an email or comment. Or if there’s some other part of Liverpool’s history you’d be more interested in finding out about, give me a shout and I’ll do that instead.

I look forward to hearing from you! (Don’t all shout at once…)

Hope you all had a great holiday and are raring to go! 😉

2009 was a great year, and this blog really got going – thanks to all my readers, over 1000 of you in November! I hope to make 2010 even better, and try to develop the blog in some way to make it more interesting. I’ll be writing more posts on Liverpool’s history and landscape, as well as commenting on the news like I’ve been doing so far. Remember, though, that all the interesting headlines are shown on the right. If you’re an avid Twitterer, then you can also follow every update at @histliverpool. I’ll be posting news items, links to new blog posts, and any progress with Historic Liverpool (I promise I haven’t forgotten that in all the blog excitement!).

It’s World Museum Liverpool’s 250th anniversary this year, so even more reason to celebrate – why not visit it again to stretch your leg and brain muscles after Christmas?

Also, the Stephen Shakeshaft exhibition ‘Liverpool People‘ is on until 24th January. I visited over Christmas and really enjoyed it! What some Scousers had to endure over the twentieth century is unbelievable, and to keep a sensa yuma throughout just about sums up Merseyside’s attitude to life!

If there’s anything you’d like to see on this blog, do let me know, but otherwise just keep reading and commenting!

Heritage at Risk in Historic Liverpool 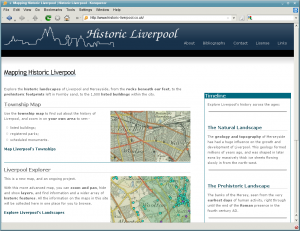 Yes, that’s a headline and almost a pun at the same time, for of course the ‘Historic Liverpool’ in the title is your favourite map-based exploration of Merseyside’s history, Historic Liverpool. I have spent rather a lot of hours over the last week moving the entire site from lovingly hand-crafted HTML to Drupal, an open source (Free) content management system (CMS). This wonderful technology means I can spend less time on moving bits of the site round, while having to copy all changes from one page to another, and simply let Drupal do all the work. For anyone who’s used a blog this will be familiar territory. You simply type what you want into the CMS, and the pre-set design will take care of all the menus, sidebars etc. on all the pages. On a technical note, unfortunately MapServer, which I use to create the maps, doesn’t play well  with Drupal (unless I upgrade my hosting package), so the mapping pages are done the old fashioned way – by hand. There are a few more stylistic tweaks to make (the article text is a bit small at the moment) but the site should be easier to maintain from now on.

Which brings me to my main point, which is that I now have more time to add stuff to the maps, and I’ve started with the Buildings at Risk in Liverpool, which can now be found on the Liverpool Explorer map (have a play around with the other layers while you’re over there). Clicking on one of the diamonds when takes you to a summary of the state of these buildings, from where you can click through to the main English Heritage website for more details and a photo. When I get a chance to, I hope to be adding my own photos to the site, as the ones on english-heritage.org.uk are a bit small.

I hope you enjoy this first of many new layers (hoping to add other ‘At Risk’ sites soon), so please do send feedback!

Save Britain’s Heritage: I’ve read this organisation’s book Triumph, Disaster and Decay: the Save survey of Liverpool’s Heritage (2009). It was mostly decay, with the odd disaster here and there, and quite sobering story of the buildings lost on Merseyside since the Blitz. In the end it was a big inspiration to include the Buildings at Risk on this site, so try to find a copy if you can.

Just a quick word to let you know that Historic Liverpool is undergoing a complete cosmetic redesign, as the home page was getting a bit bogged down, and also I visited the  final show for the Oxford Brookes/Swindon College MA in Archaeological Reconstruction, and was somewhat inspired (and unbelievably impressed!) by their work. I’ve not quite finished yet, but the new style will slowly percolate throughout the site in the coming days.

The timeline now occupies the right hand side of the homepage, with the two main interactive maps on the left. Hopefully this is a much cleaner design, and much easier to navigate. Let me know what you think!

A quick thank you to Jennie Anderson, who invited us to the show. Jennie’s website is, as you might expect from a web-leaning archaeological illustrator, a great example of attractive typography and layout, and full of fascinating archaeology too! Jennie’s MA has concentrated on interactive, Flash-based reconstruction, for such uses as visitor centres or even downloadable to your phone, to use while visiting the site. I’ll post a link here when I get one.