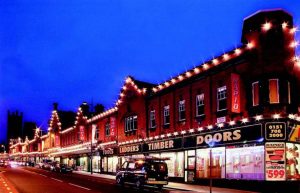 Another planning application raising eyebrows is one put in to demolish parts of the Rapid Hardware building on Renshaw Street. This is a well known landmark for anyone who’s spent any time in the city. It also happens to be where I first bought a lot of archaeological health and safety kit!

It was brought to my attention by a petition which was set up, as petitions are, to give voice to those who were troubled to see more well-known buildings from being replaced with (probably, allegedly) anonymous and generic boxes, or more student flats.

Funnily enough, Dave Bridson, who set up the petition has commented on Facebook how he did so because he thought it was right, not necessarily because he desperately wanted to see the buildings saved. As it turns out, not many people have signed the petition, especially compared to the Futurist campaign. Dave has since said that he’s happy to have given people a voice, and that the voice has not spoken very loudly against the plans.

This highlights some really important points. For a start, Liverpool is not stuck in the past, wishing to preserve every old building for the sake of it (this is what I pointed out in the previous post). Landmark (or, in Richard MacDonald’s apt post) ‘sexy’ buildings will attract support, while more run of the mill buildings will not.

I think it’s true to say that any city would value a building like the Futurist, whereas the Rapid building might not be seen in such envious light. And this shows that those who campaign to save old buildings (especially when it comes from grass roots) do assign more value to the better buildings.

Is this a good thing? It probably is, as it shows some thought goes into requests to stop or slow down development when it puts something historic and valued at risk. However, the other side of the coin is that more ‘standard’ buildings like terraces of houses or small shops are ignored when the likes of the Futurist distract attention. For example, the row of shops on Lime Street surrounding the Futurist was a neat little group which formed a cohesive whole. For sure, they were probably as neglected as the cinema, and as fragile after all this time, but they would be as important to the historic landscape which is Lime Street. In the same way that the Eiffel Tower would be a different thing altogether if surrounded by high rise apartments, it’s the ‘normal’ buildings which give the special ones their elevated status. Perhaps if the Futurist had been kept, it would have been swamped by the new development anyway.

With that in mind, looking at the loss of all or part of the Rapid building might not seem like a great problem. It’s not a ‘sexy’ building, but it is familiar. It’s part of the landscape and the streetscape, and it affects how the street itself feels – the light, the air, the walking experience. The question of whether to ‘save’ the building (and/or object to whatever replaces it) doesn’t need to hang on whether the building is architecturally or historically important, nor whether it’s simply ‘loved’. It should consider whether replacing the building (or part of it) with something else improves the street.

It’s hard to see that element when we’re looking at one building, and a campaign or petition is probably not the best way to save (or encourage good decisions about) an entire streetscape. Whether there is any way we can generate the kind of awareness which would suit the preservation and improvement of streetscapes, instead of solely headline demolitions, is perhaps something that we should start to consider. There are plenty of groups who already think along those lines, such as English Heritage and the various civic societies, but it’s time that kind of thinking permeated into the more general consciousness.

This post is not really a comment on whether the Rapid building should or shouldn’t be saved, but really a reaction to how we regard the ‘everyday’ buildings as well as the landmarks.