Whatever the Risks, it’s people that keep history alive 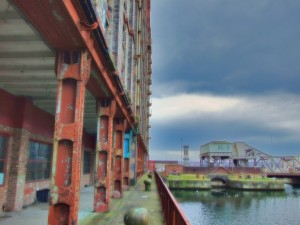 This week we get an updated list of the heritage at risk on Merseyside, see a unique perspective on how Liverpool has changed over the last few decades, plus some personal points of view on Liverpool and its past.

The Liverpool Echo has a run-down (pardon the pun) of the vulnerable buildings of Liverpool, and you can search for specifics on the Heritage at Risk pages of the Historic England website. The useful thing about the list is that it monitors changes, rating buildings at ‘improving’ or ‘deteriorating’. So even though developments have taken place in the Stanley Dock Conservation Area, it remains on the HaR list, labelled ‘Improving’. If things carry on as they are now, no doubt this Stanley Dock CA will come off the Heritage at Risk list.

More or less vegetation in Liverpool?: Here’s an interesting set of maps for you. While taking a GIS course on computer mapping, my wife Sue Greaney found a map of Merseyside showing vegetation levels in 1975 and 2010, coupled with a map showing the difference, ie , whether vegetation has increased or decreased in Liverpool over that period. Green areas show increased vegetation cover, blue areas show a decrease.

You may be surprised at what you see! I can’t explain the patterns shown here, although my experience of the city suggests this isn’t beyond the bounds of possibility. What do you think?

Three Personal Views of Merseyside History: There’s no doubt that the passion for history that has emerged over the last few decades has been fuelled by individuals becoming interested for the first time in their past, and in the places they inhabit. The Internet has brought a perfect platform for every one of these people to have a go, share their ideas, and tell the world about their corner of the globe. Here are three great examples, at least one of which regular readers will already know.

It all goes to show that even when looking across the great sweep of history, it’s the individuals who bring it to life for us. I hope I do something of this, but at least I know that there are others out there too who are keeping the flame alive.

I just want to remind you all too that the Historic Liverpool Shop is now open, selling my book, cases, mugs and more with the old maps of Liverpool on. There’s also a Historic Liverpool Etsy shop if that’s how you like to browse. Please let me know if there’s a custom order you’d like me to put in for a present or similar. Thanks for looking!