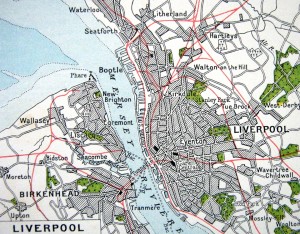 Some of Liverpool’s most fascinating history comes out of its darkest days, and to look back on it summons feelings of fascination, astonishment, but maybe even a little nostalgia for ‘simpler’ times. The links in this edition of the blog cover those times, as well as the vibrant history community that is alive and well on the web today.

Liverpool through the eyes of the TV camera lens

This is a pretty grim few minutes of test footage for an Anglia TV documentary about Liverpool, filmed in 1972. There’s no sound, which kind of adds to the solemn mood, and we see the camera panning and zooming around Toxteth streets. Although nearly 10 years before the riots, the graffiti and barbed wire show that this was no paradise even then. Graffiti on the walls is explicit, racist or both; buildings are sad and brutalist. But even so, children play in the playgrounds or the streets, women peering from windows laugh, especially when they spot the cameras on them, and life just… continues. No doubt the filming was selective, but it’s an interesting reminder of social tensions only four decades ago.

In another reminder of Liverpool’s quietening days, Ronnie Hughes of A Sense of Place takes a trip down memory lane as he visits the south docks that he was taken to as a child by his dad. As a north-ender, the Bootle docklands were his usual playground (the central docks were trapped silently behind walls at the time), but just once he was taken for a drive to the older docks. In searching for that iconic aerial image of the silted up Albert Dock, Ronnie chanced upon a set of images of the site by photographer Tricia Porter, who was just getting into her hobby on those days. Her photos of the disused docks are in fact lifting, as they were in ‘use’ by kids fishing, a dad taking his son out for the day, or chaps sitting around (possibly in the middle of a working day). Life never really left these basins.

More of Tricia’s photos are available on her ‘Porterfolio’ (love it!), and she has an exhibition at the Bluecoat, from 4th April – 4th July this year.

See the photos of the Albert Dock: When the South Docks were dying

With a little help from your readers…

The brilliant Streets of Liverpool blog has a post which has attracted more than the usual amount of words from its readers. Colin Wilkinson, the main writer, identifies a church in one of his images as that of St. Mary’s on Highfield Street. It was difficult for Colin to identify at first, but contained a couple of identifiable shops, plus a children’s playground which even Colin himself notes must be an early example of such as council facility. What’s especially interesting is the length of the comments, which give you a huge amount of information about the parish, as well as a back-and-forth on family history. Worth reading even if you’re not related!

Talking of reader commentary, the Liverpool yesterday to yesteryear group on Facebook is made up entirely of contributions from its members, and can guarantee a host of Liverpool-interest images every day. The one I want to pick out here is a post and image by Barb Jones, who shares an old photo of Edge Lane Hall. It’s a building I’ve heard of in passing before, but never really put much thought into, and certainly don’t remember seeing a picture before! 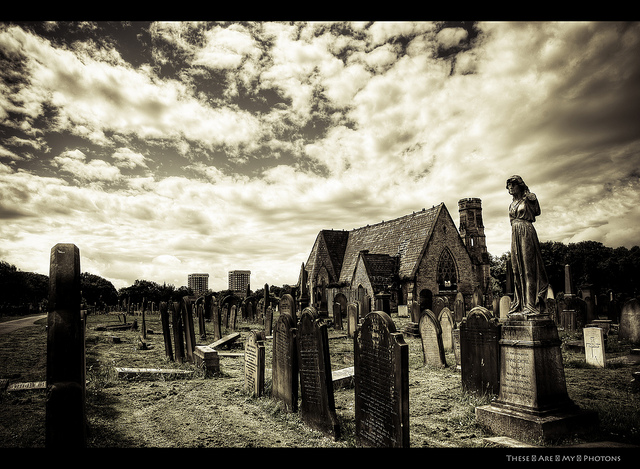 Monochrome Redux by These Are My Photons, Creative Commons license via Flickr

It’s a reminder of how even this part of Liverpool was rural not so long ago. As with the Streets of Liverpool post, a couple of group members, Daz Waite and Richard McDonald, post more images and maps to give a full context to the old building, which was demolished between 1913 and 1926. There are other links worth following, so if you’ve got a Facebook account you might want to join the group and pitch in with your own stuff.

See it: Edge Lane Hall, by Barb Jones, on Facebook

Mysteries of Menlove and the Calder Stones

Over Christmas you might have seen the final instalment of Frank Cottrell Boyce’s mystery serial written for the Reader Organisation, called the Menlove Treasure. If you’ve not come across it before, it’s an online story told through text and shadow puppetry (the latter done through short YouTube videos) to tell the tale of Rylan, a schoolboy who falls into some odd goings on at the Calderstones Hall, only to discover a cast of ancient ghosts, gods and treasures. It’s a great read even if, like me, you’re a child of the ‘older’ persuasion! My especial interest was piques by the attempt to explain one of my favourite historic features of Liverpool. The chapters were read about by FCB at St. George’s Hall, but the final chapter appears as a longer video on the Liverpool City of Readers Learning Organisation website.

Read it all: The Menlove Treasure by Frank Cottrell Boyce

I hope you enjoyed this week’s selection. Let me know if these posts trigger any comments or thoughts in the space below. And if you ever stumble across anything online which you think would interest your fellow readers, follow in the footsteps of the people above and share it with me for inclusion in a future post!