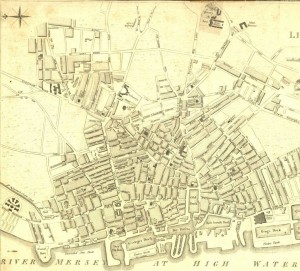 Colin Wilkinson’s Streets of Liverpool is regularly featured on this blog, if only because by its very nature it coincides with the interests covered on Liverpool Landscapes. In a recent post he meditates on the significance of Otterspool, alongside a photo of the area before the promenade was built. He takes a moment to reflect on the changes which were made over the 20th century, and then ponder about what might be in the area’s future. New developments are taking place here, with the revitalised Garden Festival site, cycle hire and other improvements.

Philip Mayer’s Flickr page is the next on our agenda. It’s full of fascinating photos from Liverpool’s recent decades, highlighting many of the recent changes to the city centre. The best in my opinion are those of Clayton Square, and the streets around it. Plonking a great glass greenhouse in the middle of these streets would always be something which left a very visible mark on the landscape, and so Philip’s photographs are doubly important. Plus, for those in the mood, there are a smattering of images of Sophia Loren…

Who Cares is a heart-rending video filmed in Liverpool in 1971. It looks at the likes of Cantril Farm – high rise buildings erected to re-home those whose houses were demolished during the slum clearances of the previous decade. It includes footage of houses coming tumbling down, of women and children hanging about the doorsteps of the old houses, contrasted with the desolate landscapes which replaced them. Young and old are seen plodding about the concrete courtyards.

It’s hard to avoid thinking that a lot of the visuals are hand-picked for their emotional punch, but the story they tell is true enough. Interestingly, images of children throwing rocks at burning cars is mixed in with demolition men standing on roofs throwing down bricks, tiles and wooden beams.

At least the children are having as much fun in the later flats as they are in the previous houses – no doubt they would have been a little freer of the worries of their parents and grandparents in those communities torn apart.

Liverpool in 1515, 1715… and 2015: There are many important anniversaries this year, not least of which is that this is the year Marty travels forward to in Back to the Future. But in Liverpool terms, we’re looking back to 1715, when the Old Dock was opened: the first commercial wet dock in the world and the springboard for Liverpool’s later wealth creation. In addition to that is the anniversary of Liverpool’s first town hall in 1515, and an attack on the castle in 1315.

Liz on the Liverpool Museums blog gives more details of these anniversaries, as well as pondering the question: what will 2015 bring that we’ll be talking about in 500 years?

He was responsible for such gems as St. James Cemetery and the Oratory in the grounds of the Anglican Cathedral, and the much-missed Customs House which was demolished after superficial bomb damage in the Second World War.

Daz’s research can’t be understated, bringing together as it does an article, a book and a handful of maps. Foster’s house is highlighted, so we can all see where this great architect spent at least some of his time on Merseyside. Thanks, Daz!