Posts from the ‘Analysis’ Category

Another planning application raising eyebrows is one put in to demolish parts of the Rapid Hardware building on Renshaw Street. This is a well known landmark for anyone who’s spent any time in the city. It also happens to be where I first bought a lot of archaeological health and safety kit! END_OF_DOCUMENT_TOKEN_TO_BE_REPLACED

The future and the Futurist

And so the Futurist cinema is coming down.

It’s been on the cards for a few months, and now people are generally coming to the opinion that it was inevitable (for which read ‘the Council pretended it wouldn’t be demolished, but always intended to demolish it anyway’). But I’m not here to debate conspiracies, because you get nowhere, and what’s done is done (by the time you read this). END_OF_DOCUMENT_TOKEN_TO_BE_REPLACED

END_OF_DOCUMENT_TOKEN_TO_BE_REPLACED

English Heritage have released a new volume of their ‘Constructive Conservation’ series, this one entitled Sustainable Growth for Historic Places. It’s all about the benefits of re-using historic buildings for new purposes, and the effects not only on the bottom line of the developer, but also the ability of these buildings to attract customers and tourists, and the benefits of creating an attractive and enjoyable place to work in. END_OF_DOCUMENT_TOKEN_TO_BE_REPLACED

As you’ll no doubt be aware, the planning application for Peel Waters was recently waved through by Eric Pickles, Secretary of State for Communities and Local Government, and there will be no public enquiry. Regular readers will remember previous posts, where I’ve come down against the scheme. But now that it looks like going ahead, it’s time to move on and consider how the development will unfold. END_OF_DOCUMENT_TOKEN_TO_BE_REPLACED

It had been on the cards since Peel proposed their Liverpool Waters scheme, but the decision was finally taken in the wake of Liverpool City Council’s decision to grant that scheme planning permission in March of this year. END_OF_DOCUMENT_TOKEN_TO_BE_REPLACED

Historic Liverpool has always been primarily about the old maps. Well, now I’m starting to put interactive versions of the ones I own on the site for you to explore.

There are five maps on the Old Maps of Liverpool page now, but I’m hoping to add more as I get them scanned in (which isn’t the cheapest thing ever). Watch this space! END_OF_DOCUMENT_TOKEN_TO_BE_REPLACED

A new year, an old controversy: UNESCO return their verdict on Liverpool Waters

Well, 2012 is just getting started, but UNESCO have set off the first fireworks in this year’s battle over the north docks.

After visiting the city in November, the UN inspectors are claiming that, should Peel’s plans go ahead, it would cause a “serious loss of historical authenticity“.

END_OF_DOCUMENT_TOKEN_TO_BE_REPLACED

UNESCO this week are visiting Liverpool to assess the threat to the World Heritage Site (WHS) posed by the Peel Waters plans. Surrounding the visit there has been a lot of debate on the role of the WHS in a modern and changing city. END_OF_DOCUMENT_TOKEN_TO_BE_REPLACED 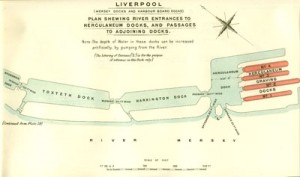