Poor architecture, not heritage, is preventing investment in Liverpool 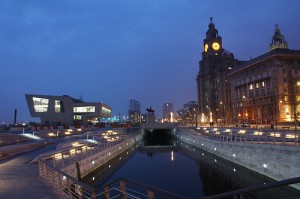 New development hand in hand with heritage, by Radar Communication via Flickr

Council Leader Joe Anderson has hit out at English Heritage for what he sees as the over-reaching influence and meddling of the ‘heritage lobbyists’ in the future development of Liverpool.

Anderson’s current gripe is related to the Liverpool Waters project, which English Heritage advised to be reduced. Since their input, the number of tall buildings has been reduced, and the centrepiece Shanghai Tower moved back from the waterfront.

The Daily Post has a balanced editorial stating that heritage matters should be considered hand in hand with development progress, and points out that many historic buildings have been brought back into use successfully in this and other cities. Coincidentally, part of the current Biennial art festival concentrates on the re-use of derelict buildings for public enjoyment.

So does heritage hold back development? As Naomi Peck, project manager of Peel’s Liverpool Waters development team said: “English Heritage would most probably be happy to see everything as it is, because that is what they do – they preserve old buildings… The scheme could have been perhaps a little more magnificent, but obviously we had to take into consideration it is a World Heritage Site.”

So, English Heritage preserve old buildings, and World Heritage Site = no magnificence, thank you very much.

Looking at this from the other direction, is heritage really the stumbling block? Is the Albert Dock a less ‘magnificent’ development because of all the heritage? Or is the heritage key to its attraction? (OK, enough rhetorical questions.) The flats at the King’s Dock and in the former warehouses at the Waterloo Docks are massively successful examples of historic buildings reuse which have not harmed the historic environment. There are other developments – the very magnificent Great Court at the British Museum and World Museum Liverpool, for example – which have added modern architectural elements to historically important buildings.

However, Joe Anderson shouldn’t be surprised or dismayed when ‘heritage lobbyists’ kick up a fuss about wrecking a World Heritage Site with modern ‘ego architecture‘ (subscription required) – massive developments which are all about money and prestige, and nothing about quality of life in the long run. Anderson may have a different point of view, but I don’t want Liverpool to turn into the Shanghai/New York of the West/Europe. I want Liverpool to be The Liverpool.

The solution to Anderson’s problem is not to stop groups like English Heritage and the Civic Societies from airing their views. Rather it is for the architects to produce creative, attractive modern designs keeping in scale with the current landscape. Even completely new builds like Liverpool One can achieve this, and the Echo Arena for another great example: it’s unashamedly modern (and I’d say attractive), but it doesn’t try to take over the whole skyline.

Compare this imagined scenario to the original article:

He said: “The Wellington Rooms, in Mount Pleasant, and other listed buildings are lying derelict because of the poor designs by the architects would have trashed the building.

“The former Irish Centre was the subject of a planning application, which was even supported by the Bishop, to attach some sort of hotel on it. The architect, supported by the leader of the city council, stopped it going ahead by failing to produce a decent building, and now it is deteriorating in front of our eyes.”

OK, so that’s a bit of fun, but remember: it’s not investment that English Heritage are blocking, nor development. It’s poor architecture. There’s one easy way to get development going, and that’s to design something creative, with life-span and beauty, and which adds to, and doesn’t replace, the amazing architecture we have been left by those who came before us.

Note: all views in this post are my own.