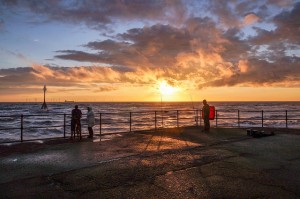 Memories are liberally scattered around this week’s links. Photos of life in Liverpool, plus revealing the hidden corners of the city, and life on the Home Front.

Cobbles on the Albert Dock: Bobby Bell was the owner of Bridletown’s Construction in the 1980s, when it had the contract to lay all the cobbles in the Albert Dock during it’s refurbishment and rebuilding. An avid amateur photographer, he took dozens of photos while he worked on the site, and now a handful can be seen on the Liverpool Echo website.

So often we praise the foresight of our Victorian ancestors in taking the photos we now treasure, but it’s not often we do the same for something as recent, yet as such a giant leap away, as the 1980s. It was a crucial, Scouser-shaping era, the future of the city hanging in the balance in a way that I, as a young kid at the time, had no idea about.

So when you’re out and about with your cameras today, just think about the archive you’re creating! Meanwhile, head on over to the Echo website to see the gallery of 1980s Albert Dock photos.

Discovering the docklands’ hidden corners: For a slightly more more ‘brainy’ read, the website Rag-Picking History is a gem for Liverpool history fans. Billing itself as “unearthing hidden places & pasts”, it’s something of a travel blog, but without a single white-sand beach or Disney theme park in sight. It’s probably all worth a read, but put in a search for Liverpool and you come up with a handful of fascinating posts about, for example, the decaying north dockland warehouses (including the Stanley Dock tobacco warehouse).

I can’t quite work out what links the writer, Paul Dobraszczyk, with the city. He’s Manchester-based, but clearly deeply interested in Liverpool, to which we all benefit. A great way to spend an hour or so. This is a link directly to that search for Liverpool on the Rag-Picking blog, which includes this and other articles about Merseyside.

Mapping the Home Front: I know all Liverpool history enthusiasts are always keen to lend a hand, or knowledge, or photos, to heritage projects. Several Facebook groups attest to the skill and determination of many people! The Council for British Archaeology (CBA) are running a First World War project to document as many of the Home Front historic remains which dot the country as they can. They’re looking for photos, documents, plans, maps… anything you might be able to contribute.

It’s part of their Home Front Legacy project, which aims to make sure that all important remains from this period are on the official records and in the right archives, as well as raising the awareness of the Great War in this centenary period (2014 – 2018). There’s a page outlining all the details, and how you can get involved with Home Front Legacy on the dedicated website.

Revitalising Prescot: Although a little outside of Liverpool, Prescot is part and parcel of the region’s history. It became well-known and respected for its clock-making prowess during the Industrial Revolution, and centuries before that it had a theatre which one William Shakespeare was reputed to have visited, and trod the boards in. The visitor today can easily see the historic fabric of the old centre, with narrow streets, the church and timber framed buildings.

However, Prescot’s in need of a little TLC, and so the Prescot Townscape Heritage Initiative aims to make use of the historic character of the place to give the town a boost. The project has attracted £4m in funding through the Heritage Lottery Fund, Knowsley Council and other local organisations, investing via events and conservation work, which they want your help with. Keep up to date with the project over on the Prescot Townscape Heritage Initiative website.

The future of Lime Street’s past: Plans have recently been revealed for Lime Street. This is the location of the fought-over Futurist cinema, as well as other historic façades. It’s a part of the town centre which has seen busier days, although businesses on the stretch are doing ok, such as my own favourite, Worlds Apart, which is still booming after all these years. Alan, the manager of Worlds Apart, told SevenStreets that he’s frustrated no one’s consulted him and his staff about the changes. All they get is stories in the paper about plans for their street.

Needless to say, the master plan from the developer, Neptune, is already somewhat controversial, and no doubt will remain so. See the SevenStreets article for the best summary of all the problems, including mayor Joe Anderson’s (belated) part in this consultation. There might still be time to air your views.

I Was There: Finally, back to history as living memory. A recent commenter on Ronnie Hughes’s A Sense of Place blog is John Viggars. He has memories from childhood trips to Seaforth with his dad, followed by tales of life using the docks themselves. He’s also got tonnes of photos from those days, complete with family, boats, docks and all.

There are now three posts from John: two about the docklands and a third about the International Garden Festival. I remember the Festival myself (though only very, very vaguely – being two years old at the time!), so I’m starting to realise that parts of my own life are rapidly becoming History. Anyway, whether as an insight to one of Liverpool’s turning points, or as a walk down memory lane, all of John’s posts deserve your attention. Head on over to A Sense of Place to read them all.

That’s all for this week. If you like what you read, leave a comment below, or sign-up to receive email updates by putting your address in the box in the right hand column.