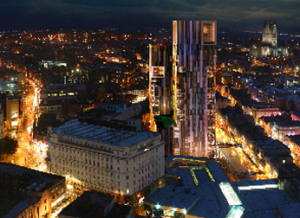 This week the developer Merepark unveiled a slick video showing the world what the new Liverpool Central Village will look like. Central Village is the name given to the array of shops and flats which is to be built to the north of Bold Street, and which will take in the vacant Lewis’s building on Ranelagh Street.

The thing which struck me was how similar Central Village will look to Liverpool One. The architecture is modern but not brutalist (much). Random colour schemes and harsh corners, but no 60s Piggery nightmare. The brands are all familiar too, with Odeon Cinemas being the most prominent.

But the question raised by the video is ‘Does Liverpool need another (mini) Liverpool One?’ Joe Anderson rightly hails the thousands of new jobs which this development will create (during and after construction), but what can history tell us about how this may pan out?

The last great wave of investment

During the Second World War Liverpool was seen as a great place to site Royal Ordnance Factories (ROF), where munitions were produced for the war effort. It was away from the dangers of bombing which London suffered from, and out of town sites like Speke, Aintree and Kirkby were away from the bombs falling on the docks, yet well connected to those docks by rail, so easing the transport of raw materials coming into the port.

When the War was over the ROF sites adapted to become part of the new economy of the mid 20th Century. Tax incentives encouraged large companies to site factories in these areas which were unrestricted in their growth – there were few neighbours in the area and the land was flat.

There was also a ready-made labour force in the form of the thousands of people who were being moved out of central slums into new council houses, maisonettes and high-rise flats.

There were many problems with these out-of-town estates, and none more famous than the layoffs during the 1970s and 80s. Even then Liverpool was starting to develop its reputation as a city of strikers and protesters, and of a self-pity growing from a feeling of victimisation. Liverpool often asked itself: ‘Why always us?’

Part of the answer presents an interesting dilemma to those who are championing this new development. The problem with the closing factories was that they were branches of multinational corporations. These corporations ‘always’ chose Liverpool because it was the easy choice. There were no vested interests in the city, no love for the place or its people. They were here for the money, and when that left, so did they.

I don’t blame Joe Anderson for celebrating the continued surge in development in the city he loves (and this blog isn’t going to turn into an anti-Anderson moan despite the tone of recent posts!). You certainly can’t take the jobs away from the people who will definitely be employed to build the Village, and who will be staffing the shops and shiny cinemas once it’s complete.

But if history can tell us anything about our own time (and this is what this blog is about) then it’s that investment in an area is strongest when the investors have a stake in the place they’re coming to.

Having lived in places as diverse in beauty as Oxford and Swindon I’m well aware of the standard arguments against the effects of ‘clone towns’ on the quality of life in a place. One of the Liverpool’s strengths has always been its range of independent – and locally based – shops which make a trip into town an often rewarding one (think News from Nowhere, Hairy Records, Quiggins and even Wade Smith). The area around Bold Street is one of the best areas for this.

But the appearance and choice in clone towns is not the only issue, and the architecture is not in question here. The experience of those protesters at the gates of the automotive plants brings home the fact that, for long term success, a local economy must not be reliant on the continued interest of outside money.

What do you think? Will the new developments be unparalleled successes? Or is history doomed to repeat itself as Liverpool continues its transformation into a modern shopping destination?