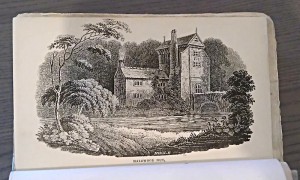 It’s been four months (four!) since I last posted, and this is possibly the longest gap since I began the blog. It’s all in a good cause though, because my extra time has been going into finishing a book I’ve been writing, on Liverpool history of course! More info in good time, but until then I thought I’d share some photos of another Liverpool history book I recently bought, plus news of this year’s Heritage at Risk register.The book Stranger in Liverpool was published in 1829, and published anonymously by Thomas Kaye of Castle Street, Liverpool. It contains a huge number of plates illustrating some of the best buildings in the town and its environs (many now lost), before written sections of a history of the town, a description of Liverpool (as of 1829, I presume) and a final section called ‘Excursive Survey’ which involves the intriguingly entitled ‘Aquatic Excursion’.

I’m looking forward to reading it, particularly to see why it was written anonymously! Though from the look of the Contents page, there’s nothing too scandalous included.  It’s a neat little book, with uneven pages rebound in the last 30 years, I think. The other interesting detail about this copy is that it belonged to one David Sheppard, whose name plate adorns the inside front cover. It also bears the name of Tobias Mitchell, who was a shipmaster of Bo’ness, West Lothian. A book which is an archaeological artefact in its own right!

The only thing missing is the great little map which was originally printed alongside, but reproductions of this are easily found, and the small size makes it less of a loss. 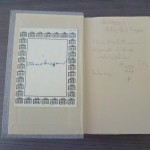 The name plate inside the cover, and some info on Tobias Mitchell 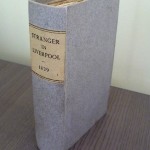 The cover of the book Stranger in Liverpool 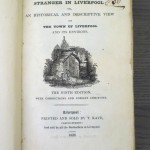 The frontispiece, showing the full title plus an engraving 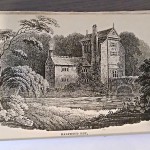 One of the illustrative engravings, Old Hutt, Halewood

Today English Heritage (EH) announce the launch of their 2012 Heritage at Risk register – the catalogue of listed buildings suffering from neglect or decay. I’ve covered Heritage at Risk before, including Liverpool’s industrial heritage at risk and English Heritage’s places of worship at risk. What’s new is that Grade II buildings (coming below Grade I and Grade II*) are included for the first time. There are 345,000 of these, which Simon Thurley, EH’s chief executive admits “is too many for English Heritage to survey on its own”. He continues:

We need help and are prepared to fund nine to 15 pilot surveys around the country with local authorities, national parks, heritage and community groups as partners. For local authorities hard-pressed by cuts or other groups who come forward this means the chance to find out which buildings most need their scarce resources. And the results will help all parties involved, including the Heritage Lottery Fund and other grant-givers, to get rescues under way where nothing has been happening for years.

The nearest site on the ‘Top Heritage at Risk’ list is the former Birkenhead Cemetery, Flaybrick Memorial Gardens on the Wirral. Heritage at Risk has met with great success since it launched in 1998, with an impressive number of ‘at risk’ buildings being brought back from the brink. Many of the newly-included Grade II buildings would increase in value should the necessary repairs be carried out, whereas unfortunately this is not the case for the more valuable Grades I and II*. In those cases, public money will be needed to convince developers to carry out such a conversion to new use.

More details on what leaves a building at risk, the efforts going into places of worship, and new teams to help EH’s local offices deal with Heritage at Risk, are on the Heritage at Risk news page.