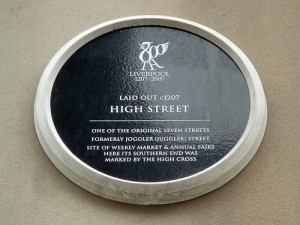 A project to map all the blue plaques in Britain has had a recent surge of additions to its Liverpool collection.

OpenPlaques is a project to “collect and open up data about plaques and the people they commemorate”, which involves placing all the information about blue plaques and the people they are dedicated to on an OpenStreetMap map. You can use the OpenPlaques database in your own projects, as it’s all under Creative Commons Attribution Non-commercial Share-Alike and Open Data Commons Public Domain Dedication licenses (which means you can generally do anything non-commercial with them as long as you give credit to the source).

The site actually includes all blue and non-blue plaques from projects with similar aims to the original blue plaques scheme from the Royal Society of Arts, now run by English Heritage. I first mentioned them back in February 2010 amongst other web sites for local history.

Since the beginning of October the OpenPlaques Twitter account has been announcing a string of new Liverpool plaques being added to their database.[blackbirdpie url=”https://twitter.com/#!/openplaques/status/120948854471393280″]

They were up to 43 by 3rd October, and were already at 84 as of writing this (16th Oct). You can submit your own if it’s not already in their database, so do lend a hand if you can. Liverpool was the first city outside London to be included in the English Heritage blue plaque scheme, which goes to show the city’s importance in national history. Liverpool’s first plaques celebrated the lives of Bessie Braddock, J. A. Brodie, John Lennon, Wilfred Owen, Captain Noel Chevasse and 10 others.

Also while writing this, I’ve noticed that a string of black Liverpool Council plaques are featured on the home page, such as this one marking one of the original seven streets, High Street.

One other thing you can help with is the location of Frankie Vaughan’s plaque. It was unveiled in 2005 at the Museum of Liverpool Life, but no one at the moment can confirm that it’s still there. Has it been moved to the new Museum of Liverpool? Or is it still in the MoLL? Let us know in the comments if you know where it is/was!