You should be redirected automatically in a few moments, but if not, please click here to see if New lease of life for Stanley Dock Tobacco Warehouse? has made the transition. 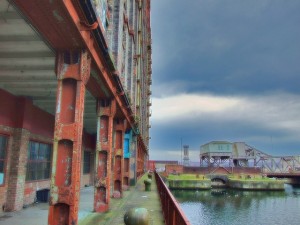 The Stanley Dock Tobacco Warehouse could possibly be described as the poster child of Liverpool’s failure to protect its heritage. But perhaps its fortunes are about to change with a project in the works to regenerate the whole of the north docklands.

The North Liverpool and City Fringe Employment and Investment programme have been granted £25m from the Government’s Regional Growth Fund (RGF), and their plans involve the conversion of the docks and warehouses into apartments, bars, shops and a hotel. The Liverpool Echo compares the scheme to the regeneration of the Albert Dock two decades ago.

The Eldonian Group, an award-winning regeneration project, will also be using some of the money to build a combined heat and power plant to provide electricity and hot water to the Vauxhall area.

This project presents a chance to regenerate and bring back into use a crucial part of the Liverpool Maritime Mercantile City World Heritage Site (WHS) which has for so long been under threat. The Stanley Dock area lies between the main business and commercial district of Liverpool city centre and the north docklands which may be transformed under the Peel Waters scheme. Being closer to the centre means that the scheme represents a natural extension of the town, rather than a wholesale remodelling of an isolated area.

Stanley Dock was part of the rapid expansion of the dock estate under Jesse Hartley, Liverpool’s dock engineer. The city’s trade was expanding into new markets (including tobacco) and new dock technologies were being introduced to keep up with the demands of commerce.

The Albert Dock and the Stanley Dock warehouses, both projects of Hartleys, with their sheltered quays and cranes on the walls were “bonded storage”, and allowed the transfer of goods from a ship directly into the warehouse, with next to no delay on the dockside at all.

Bonded warehouses were storage buildings where cargo would be unloaded from a ship and put straight under lock and key. The key was held by a representative of the Crown, and customs dues were only paid on the goods when they left the warehouse to continue their journey to customers inland. Thus the turnaround time for boats in the docks was reduced, no longer having to wait for assessment by customs officers.

Jesse Hartley was known for his ‘cyclopean’ architecture: giant stone blocks and imposing building design, and the Tobacco Warehouse was no shrinking violet. As possibly the largest brick building in the world it was ground-breaking at the time, and remains a vital part of world history.

However, it has remained derelict for 50 years.

The warehouse on the north side of the dock was added to English Heritage’s Buildings at Risk register in 1999. In 2009, when EH drew up a list of Conservation Areas at Risk, the whole Stanley Dock area was added, including the Tobacco Warehouse. With the 2011 At Risk list focussing on Industrial Heritage, there’s never been a better time to celebrate the legacy of fabulous warehouses such as these.

As with many historic areas across the country, Stanley Dock became caught between the prospect of insensitive redevelopment and the conservation lobby, and no progress was made. Various plans have been proposed to bring the dock into new use, with most ideas attempting to recreate the success of the commercial Albert Dock or the residential Waterloo warehouse just down the road. Let’s hope these latest attempts actually bring some development to the area, and do justice to the globally-important buildings around Stanley Dock.