Some of Liverpool’s most fascinating history comes out of its darkest days, and to look back on it summons feelings of fascination, astonishment, but maybe even a little nostalgia for ‘simpler’ times. The links in this edition of the blog cover those times, as well as the vibrant history community that is alive and well on the web today. END_OF_DOCUMENT_TOKEN_TO_BE_REPLACED 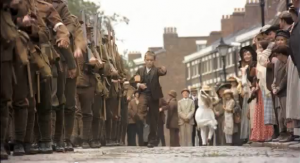 Liverpool’s comic past – defying the cynics

I just watched A Comics Tale, narrated by Alan Bleasdale. It’s part of the BBC’s Liverpool season, and concentrated on Liverpool’s comic past, and was filmed in 1981. Throughout, it trumpeted Scousers’ humour, how it brought them through the bread strikes (“aweful tha’, everyone down the Pier Head in pigeon suits”).  Even though it maintained that tone throughout, always highlighting the problems (Toxteth, unemployment), right at the end, Bleasdale’s narrative suggested ‘we’re dying, but at least we think we’re going out in style’. So it seems that whatever other people think, we thought it first! What’s more, it shows that whatever people say, they’ll always be proved wrong by Liverpool’s determination and stubbornness.

Now on BB4 is a programme about the men who run the Magical Mystery Tour, which is the psychedelic rainbow bus I used to see driving past my school a decade ago.