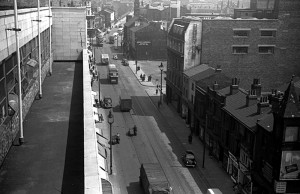 HUNT! Liverpool have been on the prowl again. Although I’ve mentioned HUNT! before, they deserve another mention because they recently went on a tour of Toxteth with Ron Cowell, discoverer of sites of international archaeological importance,  and author of the great Calderstones book amongst many others. The post talks about discoveries of field boundaries preserved in road names, indications of the quality of farmland and the hills and slopes of the city. There’s some map scans too, and if you have any information you think may be of interest to them, they encourage you to get in touch via the HUNT! Liverpool website.

I recently discovered the Friends of Newsham Park. They’ve got a community-built website which brings together a lot of information about the Park, including the Orphanage, as well as news on projects to help conserve the park and its infrastructure. The site also includes stories from its history, a couple of short videos, and links to related clubs and interests who also have an interest in the Park. You can read all about the group on the Project Newsham Park website.

I’ve always loved Colin Wilkinsons blog Streets of Liverpool, as well as his two printed  volumes of old photos which accompany it. Colin now has a new book out, called Bert Hardy’s Britain. Bert Hardy was a photographer who travelled across Britain, taking photos of everyday life while working for the Picture Post. The new book contains a selection of these photos from Colin’s collection, many of which cover Liverpool, especially from angles you might not previously have seen. Colin gives an overview of the new Bert Hardy book in the latest post on his blog.

I’ve been researching the Fazakerley’s past for the Historic Liverpool page on the history of that township. During my research, I came across a blog I’d seen now and again over the years, but which deserves mention now. Lost Liverpool contains no new posts since 2011, but includes such interesting topics as Where was Walton Hall? and the History of Aintree University Hospital (which seems to be a favourite topic of the author, an anonymous woman fascinated with her local area). Read more about the lost history of Liverpool on her blog.

As I’ve just mentioned, I’ve been writing about the history of Fazakerley, hoping to cover all the townships of Liverpool before too long. The text is all there now, and it only remains to add a Further Reading section and some images. I’m having trouble finding something useful and legal-to-use. If you know of anywhere I can get photos relevant to that page, do let me know. Until then, have a read about the History of Fazakerley.

Bonus Link: We all love maps here, of course, so here are a huge bunch of maps showing you things about the world your probably didn’t know. I’ll say no more, but encourage you to explore it for yourself. Which is the only country in the world not to offer maternity leave? Find out with these maps which will change the way you see the world.

I’ve mentioned two books in this article. Firstly, Ron Cowell’s The Calderstones is a one-stop read for everything we currently know about the prehistoric monument which stood in the south of Liverpool before being dismantled and moved to a greenhouse in Calderstones Park. Secondly, Bert Hardy’s Britain is Colin Wilkinson’s brilliant new book showing some of Hardy’s photography work, including images from Liverpool. If you buy other of these books through Amazon via the links here, then you’ll be helping Liverpool Landscapes stay online. Thanks!

Tags: Fazakerley, newsham park, photographs, Ron Cowell, toxteth
From: Export, News
← Museums, World Heritage and Woolton in Bloom
Liverpool from above and around →