Medieval church of All Saint’s, Childwall, to get new extension 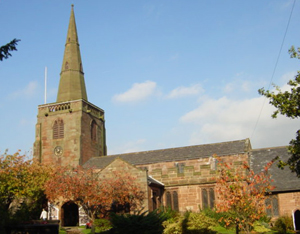 Proposals for new developments at Childwall’s All Saint’s church look set to get planning permission. The plans are labelled ‘controversial’ by the Liverpool Echo.

All Saint’s is Liverpool’s oldest surviving church – parts date to the Medieval period – although the only parts of the building which will be knocked through are more modern sections of wall. In addition to this around 180 bodies may need to be exhumed and moved to the  Bloodstained Acre, land to the north never before built upon.

As opposed to a lot of controversial development around Liverpool’s historic buildings, the one-storey extension tries to keep in with its older neighbour and, like the church itself, is to be built of red sandstone. As well as this, All Saint’s has been modified, rebuilt and remodelled several times since it was first erected in the 14th Century, and so should not be considered a perfectly preserved 700 year old artefact.

The Bloodstained Acre, or ‘Bloody Acre’, has local associations with the 16th Century “Childwall Riot” (of which only the Yo Liverpool forum seems to give much detail)  or a Civil War skirmish.

However, recent research by the Diocesan Archaeologist showed that the oldest reference to ‘Bloody Acre’ in print was in 1982, and no Civil War skirmish is known to have taken place here.

The tithe maps name the field as Church Ashfield (a much more revealing name if you ask me!), and the site seems to be little more than an overgrown field – a haven for wildlife if nothing else. Perhaps merely its ability to stay undeveloped across the centuries has lent it a mythic air.

Coincidentally there was a recent post on Colin Wilkinson’s Streets of Liverpool blog showing an image of Childwall taken in the last century. At the time the photo was taken – on Score Lane – the area was completely rural, and in fact a good distance from the edge of built-up Liverpool. All Saint’s Church can be seen in the background, dominating the skyline for miles around.

There’s a whole page dedicated to the History of Childwall on the Historic Liverpool website.

Jonathon Wild, creator of the Save Childwall Church website, also has a detailed Childwall history website (note: it’s totally Flash based, so you’ll need the Flash plugin to view it)