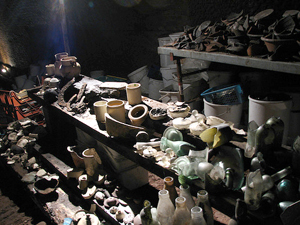 The Merseyside Archaeological Service (MAS) has been shut down, and now there is no longer access to the Merseyside Historic Environment Record. According to the notice on the Liverpool Museums website this was due to the removal of funding by all partners.

The MAS was set up in 1991, and received funding from the five Merseyside local authorities (Liverpool, Wirral, Sefton, Knowsley and St Helens). Historic Environment Records (HERs) grew out of the Sites and Monuments Records which began with Oxfordshire in the 1960s to cover the whole country by the 1980s. The change in name came in the last decade to reflect the increase in coverage and scope.

One of the most important roles for SMRs and, later, HERs is to provide information to archaeologists (whether working for commercial companies, as consultants or as part of local councils) to investigate the archaeological potential of an area ahead of development.

With the introduction of Planning Policy Guidance (PPG) notes 15 and 16 at the start of the 1990s archaeology finally became an integral part of the planning process. If you wanted to redevelop a site you had to know how much history you were likely to destroy. Some of the most famous examples of sites to come to light through this process are the Southend Saxon King discovered in 2003 and the Viking burial ground in Weymouth.

With a legal obligation to consider heritage as part of the planning process (and with the new Planning Policy Statement 5 which replaced PPG15 amd 16 in March 2010) there would seem to be a critical issue here: how will developers find the information they need to carry out sufficient research? I would have thought that there’s a statutory duty to give access to the HER, but it seems that if it’s not there then you’re off the hook. Ignorance may be bliss for developers. For archaeologists, other sources will have to suffice.

The Museums announcement advises you to contact the five councils, whose relevant webpages (when these pages mention it…) still point back to the MAS page announcement. It seems you’re left to send an email or phone them for advice, but it looks like, at least for now, there is no access to Merseyside’s Historic Environment Record.