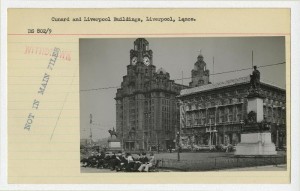 The National Archives have produced UK Photo Finder, a map-based tool for finding historic photos in your area.

The free tool is one of their ‘Lab’ projects, and so is open for comments and queries, though you may find a few bugs here and there (one user found it doesn’t work on Firefox for the Mac, and I’ve found it can occasionally refresh at annoying moments). Nip on to the site and have a play around.

There are 31 photos of Liverpool City Centre (although there’s a sneaky one of the Sefton Park Peter Pan statue in there); 5 attached to Huyton; and 18 on the Wirral.

The images are also shown attached to their record cards, keeping the photos ‘in context’ as archives, not just as photographs.

The photos at the moment are exclusively from the important Dixon-Scott collection, although I suspect that if this pilot is successful, they will extend it to other collections. I hope they do, as this is a really great site. Dixon-Scott is of great interest to readers of this blog, as he saw and recorded the changing landscape of Britain with the expressed aim of preserving what he saw as the disappearing landscape.

It’s also quiet similar to the independently produced (and ‘crowd-sourced’) Historypin project, which I also recommend you have a look at (and which also has a few bugs to iron out).