Liverpool’s Redundant Buildings (or, What future for Stanley Dock and friends?) 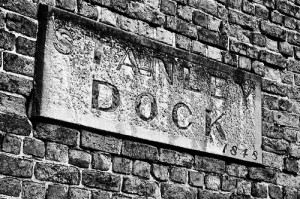 There has been a certain amount of interest in my post on re-using Liverpool’s derelict buildings and in particular the derelict tobacco warehouse at Stanley Dock, which many (me included) would like to see regenerated. A few questions remain, such as the problem of too-low ceilings (are they too low? How low is too low?). If this is a problem, are there any other uses to which the huge building could be put (See ‘Stanley Dock Tobacco Warehouse below)?

There is also of course the larger problem of the isolation of the warehouse and other buildings down that part of the city. It’s handy for the town centre, but a little too far to walk, but possibly not worth driving in.

We could sit around here all day discussing the problems of regenerating the warehouse area, but I’d like to keep the focus on the wider issue of the redevelopment and re-use of derelict buildings, of which there are many around Merseyside. There are other cities in the country who have already taken up the challenge. Four of them are mentioned in the English Heritage (EH) publication Making the Most of Your Local Heritage: A Guide for Overview and Scrutiny Committees, downloadable from the HELM website (and which actually has a photo of our own fair city on the cover).

Although the booklet is aimed at those already involved in local heritage and planning issues, any of us can take its advice on how to make the most of our historic landscape and the buildings in it. Of particular interest is Case Study 3, Wolverhampton and Heritage at Risk: Protecting the Irreplacable (can you see where this is going? ;)).

Wolverhampton City Council recognised the considerable potential of redundant historic buildings when in 2004 a scrutiny panel was established to investigate how an increasingly uninhabited historic environment could be used as an effective impetus for regeneration. The review attracted widespread attention amongst the local press and community as the Panel sought to establish how new uses could be found for a significant number of historic buildings…

Their report found that a crucial factor for success was the partnership between the City Council and developers, and recommended a set of character appraisals for important sites and other areas at risk. Could this be a solution for Liverpool? Does Liverpool have a similar process or committee? And what role can local residents play in the absence of such organisations? (Check out the advice for Heritage Champions on the HELM website).

I’ve found an old Liverpool Echo story referring to plans to regenerate the whole warehouse area from Dec 8th 2003, with “1000 building and permanent retail jobs” by 2008. I think we all know what happened to that optimistic scheme. Originally, owners Kitgrove had planned to demolish the building and keep the north west supplied with bricks “for the next decade” (the warehouse is the largest brick building in Europe). Luckily heritage groups and the city council opposed the plans.

Another scheme to regenerate “starting in 2009” was reported in June 2008 (scroll down to Stanley Dock).

A problem both articles mention is that little light manages to make it into the centre of the building, requiring that it be cored out to create a central atrium, something akin to the entrance to World Museum Liverpool. Also the general complexity of the building means options are limited for re-use. Nevertheless, past projects were ambitious: “There will be an exclusion zone on part of the roof to provide a nesting area for peregrine falcons.”