Liverpool Rebranding, and have your say in the Lime Street debate

Liverpool is no longer seen as being part of ‘the north’ – rather it has carved out irs own niche as a unique place, alongside places such as Edinburgh. To capitalise on this turnaround in its image and reputation, and in the light of Capital of Culture 08, a £150,000 branding exercise will see a new post-08 logo being plastered over a fly-over near you. You can also wear it on a sticker or a pin badge. The Liverpool Echo has details of the research and branding. 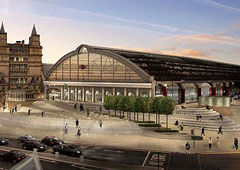 Liverpool has had its fair share of new skyscrapers in the past few years. Now the steel and glass replacement for Concourse House is no longer on the cards a debate is growing over whether Lime Street looks better or worse without a tall building on its frontage. More of fewer tall buildings in the city centre? The tower discussion goes on at Liverpool.com