Comments Off on 95,000 Aerofilms aerial photos to go online 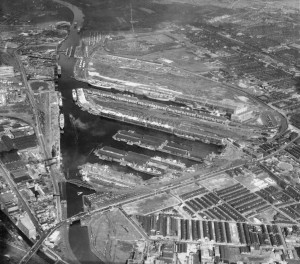 The Heritage Lottery Fund have recently agreed to grant £1.75 million to help put an amazing collection of aerial photographs online.

The photos will be conserved, scanned and made available on a new website, to be called Britain from Above, and is a collaboration between English Heritage and the Royal Commissions on the Ancient and Historic Monuments of Scotland and Wales.

Aerofilms was a company set up in 1919 by veterans of the First World War, and flew across the UK taking over a million aerial shots. These are now held in Swindon, Edinburgh and Aberystwyth by the three main organisations involved.

The project will start digitising chronologically, and so will have photos from 1919 to around 1927 when the website launches in 2011. Once up, visitors will be able to search for images, and tag and add notes to them to create a ‘crowdsourced’ archive of information. This is going to be a pretty amazing resource – I’ve seen some of the shots (an example is above), and the Aerofilms collection kept growing until 2006 so it’s an important historic resource. Until the site goes up you can order photos covering England through the usual NMR channels.

For more details, contact aerofilms@english-heritage.org.uk, or sign up for updates on the English Heritage news page. Of course, as soon as I hear any more myself you’ll hear about it here!

Comments Off on More awards for Merseyside buildings 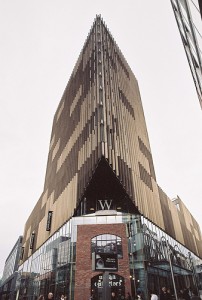 Liverpool has once again won a slew of architecture prizes in this year’s RIBA awards.

Awards were given to Liverpool One, Sites 1 & 7, the Pier Head Canal Link (which I personally love, and which is some consolation for the Carbuncle Cup awarded to the Ferry Terminal last year) and the John Moores Art and Design Academy This means that three out of the five North West winners are from Merseyside.

A lot of the awards went to educational projects (including LJMU), and it’s been noted that this may be the last time education has such a chance as this. A moratorium on new school buildings has since been announced as part of the new government’s cost-cutting measures.

The Heritage Lottery have announced that they are giving grants of between £250,000 and £2m for ten countryside areas, known for their historic natural landscapes. The aim of the Landscape Partnerships programme is to encourage communities to become interested and involved in preserving their local heritage. While none of the areas nominated this week are urban (or, indeed, man-made), it seems to fit with the Conservative’s ideas of ‘Big Society’, and it may only be a matter of time before this kind of scheme spreads to other heritage areas such as our own World Heritage Site.

A few other bits and pieces… The new minister for Heritage and the Built Environment is John Penrose (Conservative), who is also the minister for gambling and horse racing! Make of that what you will.

As part of the BBC’s History of the World project, they showed The Tale of Two Rival Cities. This is the story of Liverpool and Manchester, and how the two most important cities in the north-west vied for supremacy during the Industrial Revolution.

In reality they relied on one another: Liverpool was the gateway for the raw material for Manchester’s cotton manufacturing. It was a symbiosis, but Liverpool gentlemen overtaxed the Manchester men, leading to the construction of the Manchester Ship Canal to avoid Mersey tolls.

It’s a great programme, hosted by Stuart Maconie (from Wigan, halfway between the two cities) and covers everything from slavery and steam engines to gentrification and the trade unions. It’s available on the BBC iPlayer for a short while.

The Financial Times has a special report on its website entitled The Future of Cities. Although I haven’t had a chance to look much into it, it appears to be a huge resource on architecture, business, planning and the environment. If you want to read anything on current urban thinking, then this is probably a good place to start.

And finally: I’ve had to disable trackbacks and pingbacks. These are similar to comments, where a paragraph of your blog will appear below a post of mine if you mention it on your own site. And, like comments, they’re open to abuse by the less salubrious parts of the web. It’s one of the risks of blog-writing, I suppose, but let me take this opportunity to let you know that you can still comment! Please do – I’d love to know your own views on what I’ve written about!