Liverpool: a port of world significance 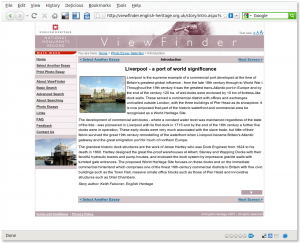 Liverpool: a port of world significance, on ViewFinder

There are many sources of information we can use to investigate Liverpool’s history. There is the local Historic Environment Record (HER), the many libraries, and the local record office.

On a national scale, and a counterpart to the HER, is the National Monuments Record (NMR) in Swindon, which has been part of English Heritage since 1999. The NMR holds millions of photos, plans and other documents, some of which it puts online.

When I first started work for the NMR I played a small role in the expansion of ViewFinder, and this is still my favourite English Heritage site. One of the best, but little-known features are the entrancingly-titled Photo Essays, one of which is called Liverpool: a port of world significance.

This is a short introduction followed by 12 images taken from the NMR’s archives, with captions written by Keith Falconer, one time Head of Industrial Archaeology for English Heritage.

It was written a little while ago now, and some of the pictures feel a little out of date (the view across from the Albert Dock to the Pier Head seems to be missing… something) but it’s refreshing to read about the city’s history and architecture from an author who doesn’t appear to feel the hot breath of passionate Scousers looking over his shoulder. He gives the city its due without hyperbole, and acknowledges that it was, indeed, a city of world importance.

As well as the Pier Head and Stanley Docks, Falconer takes in civic buildings like the Town Hall, and the under-appreciated Oriel Chambers, one of the first iron-framed buildings in the world.

Once you’ve read that, there are a couple of other Photo Essays which might take your fancy, but don’t forget to look at ViewFinder’s entire collection of Liverpool photos. There’s stuff from over 150 years of history, including photos that aren’t that old, but are already becoming important records of Merseyside’s past.