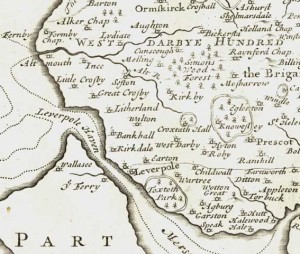 Liverpool, from Lancashire, by Robert Morden, 1695

This is the first in a series of posts which will hopefully help you research the local history of your area, whether it’s Liverpool or elsewhere. It’s about maps, as my own main site, Historic Liverpool, is based on maps. Part 1 will focus on late 19th and early 20th Century maps.

Maps are an amazing way to research local history. For one, you can start with a recent map, and then by looking at increasingly older editions you can see in reverse the changes which have happened over time. You start with something very familiar, and gradually work your way back. Sometimes, an unbelievable amount has changed in very little time.

But whether you are researching Liverpool, or another city or any rural area of Britain, you’ll need to know what maps have been made of your location, and when they were made. Luckily, in this day and age it’s not hard to find them.

For every local historian, the first port of call must be the Ordnance Survey maps. You can pick up the current version for around £8, or a recent second hand copy off eBay for a fiver. Get a 1:25,000 Explorer map – these show individual buildings but cover enough area (unless you’re really unlucky!) for your needs.

Now you have your anchor, your reference point for all the other maps you’ll be looking at. This serves as the base for your next step, which is known by the professionals as ‘map regression‘. This just means that you collect as many maps as possible, and work your way back through them and noting the changes. I’ll work through an example of this in a future post.

Getting a recent map of your area should be easy enough, but slightly older ones are going to be second hand, so you need to be aware of where to get them.

Your first choice for buying paper maps has to be eBay. I’ve bought almost all of my OS maps from this site, each for about the price of a pint of beer. eBay seems to be strongest with the years between 1930 and 2000, particularly 1950 – 1980. OS maps from across this period repeatedly appear for a couple of pounds. Keep an eye on this site so you’re ready when the right map appears, and also you’d do well to keep an eye on what you’ve already bought – more than once I’ve nearly ended up with two maps from the same year!

Older OS maps are a bit harder to find (see below), although occasionally a great find pops up on eBay. Luckily, there are ways you can get a look at OS maps without leaving the comfort of your own home. There are a couple of web sites which let you view old OS maps, and some of these are very nifty mapping sites in their own right.

Old OS Maps is a simple name belying an amazing little tool. Unfortunately there’s a big black hole where Liverpool should be. I’d scan in one of my own maps to donate it if only I had a big enough scanner! However, the site’s well worth a look, as it overlays a small modern Google map extract over the centre of the screen, overlaying an OS map from around 1925 to 1945 (depending on location). Have a look if your area lies outside Merseyside.

Leverpoole.co.uk used to be one of the best sites for Liverpool maps. However, most of the maps have been removed now due to ‘unauthorised use‘. This, like the much-missed Toxteth.net, used to be a fantastic resource. It’s a great shame that the owner, Tony Swarbrick, felt this action necessary, and a shame that his stuff was being used without his consent.

However, there is still the 1930s Philips Street Map of Liverpool on there. This is divided into squares, based on the original map gridlines, which are scanned in at a high resolution. There’s also a text index below the map if you know the rough area you’re after but can’t spot it on the map. And then you can click to enlarge the image, which is a great bonus!

Sites of interest on this map are the Overhead railway down the Strand, and the Chester Basin still open in front of the Dock Board Office.

As an aside, Leverpoole.co.uk also has a huge number of photos of Liverpool, which are great for researching listed or historic buildings.

Getting maps off eBay, and viewing maps online are the cheapest ways to get the most common editions, but the following sites will sell you brand new reproductions of old maps. This includes difficult-to-find early editions.

This site publishes a huge list of maps of Liverpool and elsewhere. They’re paperback maps about A3 size, and extremely detailed (though that means they cover a small area). The strange thing about this site is the lack of illustration, and that once you click on links the text turns yellow, making them very difficult to see! However, the maps are an unparalleled resource, and are also sold all the time on eBay.

Cassini are a large commercial map company, slightly reminiscent of the National Archives web site, and sells highly polished map products of all types. You can get downloadable or printed maps, and specify the area and period you want. There’s also a boxed set of maps of Liverpool, which comes in useful for the wide-ranging form of map exploring!

In many ways David Archer’s is a strange site. Again, a site with little in the way of pictures, and a shop which appears to take orders exclusively over the phone. Still, it’s these quirks for which I have a certain admiration. Take a look at the informal blog “A nice cup of tea and a chat about maps”: it’s quite a rambling but entertaining diversion into other map sites, Christmas cards and exhibitions. It also reveals that David’s a fan of free and open source software, which always gets the thumbs up from me!

There’s a massive list of all the maps they stock, but if you don’t know what you want, or can’t find it, then they encourage you to contact them.

This has been a fairly lengthy overview of map sources. There are many more online, but these are the few I keep going back to. In the next part of the series, I’ll have a look at older maps, which are often a lot harder to find.

Of course, if you know of better places to get hold of old maps, share it in the comments!