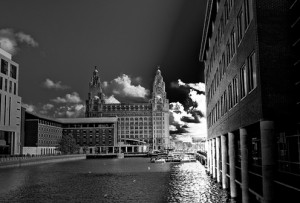 Two of Us, by Eric the Fish via Flickr

Welcome back to the Liverpool Landscapes blog! I do hope you came checking every day while I was away ;-), but even if not, you’ll be glad to know I’m rested, relaxed and raring to go to bring you the most interesting bits of news concerning the history of Liverpool. The theme of this post seems to be milestones, in a way, so let’s start with politics…

The general election and history

The first occasion on the horizon is of course the General Election. As a civil servant, I should probably be careful what I say in the run up to May 6th, but it’s worth pointing out that the Museums Journal this month contains a short analysis of what the main parties intend to do should you vote them into power next month. (You’ll need to register to view the article, or pick up a copy of MJ in the local library).

All the parties seem to agree on free admissions to museums, a move away from targets, and on increasing access to arts and cultural institutions. However, Louise de Winter of the National Campaign for the Arts notes that Labour’s reliance on free admission to help with increased access is not enough.

The Conservatives emphasis on helping people to help themselves (“Big Society, Small Government”) may extend to the cultural sector, with an ‘arm’s length principle‘ being applied to supporting museums.

The Liberal Democrats also want to enable museums to be more independent and enterprising, and want to generate more arts and heritage money from the National Lottery through tax changes.

At the time of the Journal’s press, the Labour manifesto had not been released, but it noted that the party wanted to ensure all Britain benefits from the digital revolution, and to build on earlier schemes such as Find Your Talent.

Even though the Heritage Protection Bill did not make it into the Queen’s Speech last year, work has continued on reforming the way the historic environment is cared for.

The long term aims with heritage protection reform (HPR) are to replace the current system of listed buildings, scheduled monuments and other designations with a single, hierarchical system. This would make it easier to protect historic sites and buildings, as well as make it simpler for owners of such assets to find the information they need to effectively protect them.

The new document also covers such topics as approaches to planning, climate change issues, and the monitoring of the historic environment. It’s available to download from the Department for Communities and Local Government Planning for the Historic Environment page.

Somewhat related to this is the Government’s Statement on the Historic Environment of England 2010, which has a lovely picture of Canning Dock on the front (minus the new Mann Island developments it seems, but we’ll skip round that issue…).

In the rest of the news…

Well, those are probably the big stories of the day, but there are a few more tidbits to cover.

It’s International World Heritage Day tomorrow (18th April)! Now, I’m assuming that anyone reading this post is somehow interested in a certain World Heritage Site, and now’s your chance to raise awareness of where it is, and the work it takes to preserve and look after it.The Global Development Research Center (sic) has a few suggestions on what people can do to celebrate and commemorate.

Liverpool City Council have organised five tours of parts of the city which fit in with this year’s theme, which is the Heritage of Agriculture. Now, you may argue that Liverpool’s WHS has little to do with agriculture, but as the foremost port of the empire, merchants in Liverpool oversaw a huge proportion of the transport of the world’s agricultural produce. For details of the tours, download the leaflet from the Liverpool World Heritage web site. Places are limited, so get in early!

Speaking of mercantile heritage, the Old Dock is finally to be opened to the public on 4th May. As the BBC report, the remains of the dock wall were carefully preserved during the construction of Liverpool One, and can be seen through a window placed in the floor at the bottom of the steps from the Liverpool Wheel where the Liverpool Wheel used to stand [cheers for the correction, Adrian!].

From next month, there will be a “visitors’ facility” to allow you to view objects found during archaeological excavations there, a computer reconstruction fly-through, and the east section of the dock which has a tunnel suspected of linking to Liverpool Castle. More details are available on the Maritime Museum Liverpool web site.

And finally-finally, architects Baca have another masterplan to ruffle the feathers of the Liverpool Preservation Trust et al. This time the south docks are in the picture, and Baca want to “bring an interesting new approach to waterspace design that will unlock the potential of these wonderful docks and the World Heritage Site”.

As you know, I for one consider that the World Heritage Site needs its potential unlocking. It’s so… tied up there in those creaky old buildings.