Liverpool Culture Director has high hopes for 2010, and history under threat and online

Claire McColgan, Liverpool Council’s culture director, has spoken to the Echo about her hopes for 2010, and how Liverpool should build on the successes of ’08. She mentions the new Central Library, which should open in the next year or so, and the forthcoming Museum of Liverpool, which is very close to completion. It’s great that so many things came out of ’08 (as McColgan points out) but let’s hope Liverpool can see beyond its recent successes and truly stand on its own merits, of which there are plenty. 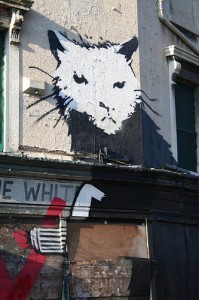 The Whitehouse Pub, complete with Banksy artwork, by Vinnn via Flickr

UPDATE: Frenson now have two months to sort these buildings out for compulsory purchase happens.

Frenson Ltd, developers, may soon be served with a repairs order for two historic buildings they own in Liverpool, as the Echo reports. Both the Watchmaker’s building, in Seel Street, and the legendary Whitehouse pub, in Berry Street are gradually falling apart, and the city council have promised to compulsorily purchase the buildings, or force the owners to repair them, unless action is taken soon.

The Watchmaker’s building is just part of Liverpool’s great horological history, with makers such as Thomas Russell still greatly admired for their craftsmanship. There is even a watch museum in Prescot, where Russell was based.

Finally, as the snow closes in on Merseyside, don’t let your appetite for museum stuff fade! On the National Museums Liverpool website you can now explore their Winter Online Exhibition, with bits and bobs from all corners of the museum group on view. There are stuffed animals, painted snow scenes and Inuit cultural objects to look through, each with its own description.

I don’t know about you, but my favourite’s got to be the little Inuit polar bear carvings!