Visible in Stone: women’s history and the built environment 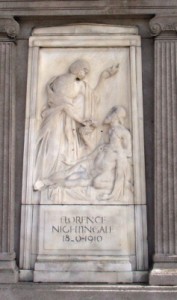 English Heritage and London Metropolitan University today launch Visible in Stone, a project and online resource to explore the influence women had on the built environment during a century of intense social change.

After the Second World War, and the undeniably essential jobs done by women during 1939-45 occupying the gaps left by conscripted men, women had gained political and social rights perhaps undreamed of by their ancestors of one hundred years before. However, the journey to this point began to take off around 1850, and the Visible in Stone project seeks to publicise the archives and information which bring this journey to life.

How this ties in to this blog and the very phrase ‘visible in stone’ lies in the institutions and organisations which campaigning women and men formed themselves to fight for rights such as suffrage. An example is the meeting of the Manchester National Society for Women’s Suffrage in the Manchester Free Trade Hall in 1868. As the English Heritage page says: “The buildings … are a monument to those women who had the tenacity and courage to argue for and capture their vision for our future.” Wash houses, lodgings, offices  and even shops were all arenas where women began to change their place in society.

I have to admit that my knowledge of this type of history in Liverpool is limited, although I know that the city is one of three (along with Derby and London) which has a monument to Florence Nightingale (at the corner of Princes Road). In addition, the first trained Nightingale nurses began work at the Liverpool Workhouse Infirmary.

The Visible in Stone project is perfect for one such as I then, as they want your help. There is a Visible in Stone Flickr group associated with the project where you can add your photos of buildings important to women’s history. This should build into a collection of images to celebrate the journey from 1850 to 1950, and highlight the impact on the built environment this period and these people had. Do go and see if you can contribute.

But, while you’re here, are there any more places on Merseyside with an essential role for women between 1850 and 1950? Let us know in the comments.

A lot of the themes covered in this blog post, as well as Visible in Stone can be found in Women’s History: Britain, 1850-1945: An Introduction, edited by June Pervis. The book consists of chapters dealing each with a theme on the topic, and is an introduction to women’s history.

If you’d like to support this blog, please consider buying this book through the affiliate link. Click on the book cover to go to Amazon.