You should be redirected automatically in a few moments, but if not, please click here to see if Toxteth – Some distant childhood memories. has made the transition. 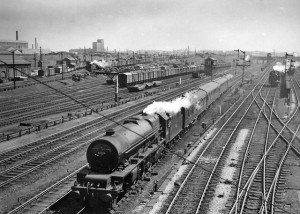 The following blog post is a bit of a departure from the normal round of news or analysis.

I was approached by Derek Tunnington who was born in Leeds but grew up in Toxteth, and has many memories of his childhood in Liverpool. What follows is his account of those years.

I’d really like to hear what you think of this. Is it the kind of thing you’d like to see more of? Do you have similar stories to share? Let us know in the comments, or contact me directly.

I was born in 1927 at my aunt’s house in Harehills, Leeds. My father, Joe, was employed by Thorne’s Toffees of Leeds as a representative in Liverpool. This came about as my parents had been renting “rooms” in a tall Victorian house in Kingsley Road, Liverpool. The landlady was not prepared to accept a small child in her establishment, and when my arrival became imminent, my mother, Lilian, moved to Leeds where most of her siblings lived, and where both my parents had been born. Dad, meanwhile had found a house to rent in Arundel Street, just round the corner from Kingsley Road, and soon Mum and I returned to Liverpool. I think the house was number 8, Arundel Street, but I am not sure of the number.

Walking from Kingsley Road and down Arundel St. our house was near the lower end on the left-hand side. It was a terrace house, with the front door leading directly on to the pavement. There were two stone steps leading down which were kept clean and bright by Mum scouring them regularly with a piece of orange coloured sandstone. Folk had a pride in the appearance of their homes, even rented ones, and in the North of England sanding was a regular habit.

There was no garden, but we were lucky to have a tree growing in the pavement in front of No.8. The house was double-storey, but I don’t recall any attic. The windows were vertical sliding sash windows, with stone sills, also sanded. At the side of the house was a ginnel which led to the rear of the house and a transverse passageway connecting the backs of several houses. The ginnel was enclosed by high brick walls and some were topped with broken glass.

Behind the house, we had a paved yard, with some building at the bottom which included laundry facilities. Dad loved flowers and made a modest garden in this yard by placing a miniature wall, one brick high in front of one boundary wall. He obtained soil by begging it from greengrocer shops, where it had fallen off the potatoes, and carried some home each day in paper packets. Climbing Nasturtium plants seemed destined to be the most successful flowering plants, though I think he managed to grow some culinary herb, mint or perhaps thyme.

Inside the house, we had no electricity, and the rooms were illuminated by gas light. These gas lamps were suspended from the ceiling by a kind of pulley system, and it was a daily event to watch Dad lower the gas chandelier to light the gas, and often to replace the fragile gas “mantles”.

I do not remember much detail of our furniture, but Mum put lace curtains across the windows, with floral curtains to be used at night time. We were not well-off, so the furniture would have been rather basic. The bath, I recall, was a galvanised iron tub which was usually set before the open coal fire in the living room.

Inside and behind the front door was a “draught curtain.” This was a heavy velvet curtain hanging on a hinged rail, and when the door was closed, the curtain would be swung across behind the door to exclude draughts.

Dad had been one of the World War One forgotten heroes. He had been severely wounded twice in the Battle of the Somme. The second time was reputed to be the result of rescuing a comrade trapped in No-Man’s Land. He was Mentioned in Despatches and was awarded a minute piece of bronze in the image of an oak leaf, to be worn on one of his war medal ribbons. The Germans were however much more generous and left him with over thirty bits of good German steel in various parts of his body. As a result of these injuries, he was often in hospital for removal of shrapnel.

We did have some happy times, going to Sefton Park, and Lime Street station to see the very old railway engine displayed inside. We also managed to take a couple of holidays in Anglesey.

I had two special friends in Arundel Street. One I only remember as “Cyril” and the other was Donald Adamson, whose parents were friends of ours for several years.

Dad had had very little formal education, having left school at under 13 years of age, but he was very self educated as he was a keen reader of almost anything and particularly of history, geography and Nature.

We did not have many childhood toys. Most were home made from bits of wood or were simple tinplate motor cars or railway trains. We also raced tiny home made boats down the rainwater gutters, or flew paper aeroplanes or even kites in one of the parks. There was no television in those days and the BBC did not always reach our very basic radios with any clarity. Dad, however, was a great raconteur and told me many tales of his own-created Canadian backwoodsmen, Jake and Bill.

I only remember one close neighbour, Mrs. O’ Reardon (?) who always had a pram outside her front door at No.6 (?) – I never knew whether there was just one baby or a succession!

After a few very happy years of watching the rent collector arriving each Friday with his rent book, and splashing in the water running down the overflowing gutters (why was it always raining?), Liverpool, (and the outside world ) was suddenly hit by the Great Depression. My father returned to work after yet another stay in hospital, to be told that his job was no longer available. Those not 100% fit were the first to go. There was little social relief in those days, apart from a small “dole” and Dad spent all and every day tramping the streets of Liverpool looking for work. He took the view that time was better spent searching for work than queuing for a few shillings of dole. I also think personal pride had something to do with his attitude.

I was already attending a form of “Nursery School” in Granby Street School, although our only “education” was the singing of children’s religious songs. I think Mum had sent me there as she had enough other worries trying to make ends meet. It was also within walking distance of Arundel Street.

It is interesting to reflect how safe it was for a small child to walk the streets in the 1930’s. One day I dawdled my way back home and Mum gave me my supper which consisted of a bowl of soup and a slice of bread, no butter. I was rather puzzled why I was eating alone, but Mum told me she had already eaten her meal. Many years later she told me that she and Dad had had nothing to eat that day. The cupboard was truly bare.

Dad was a heavy smoker, and one day he discovered that the “Sweet and Tobacconist”, where he bought his Woodbines, was available on a rental basis. The rent was about the same as we were paying for the Arundel Street house, and the shop had living quarters above. Dad reasoned that most men would give up food and beer, but always needed their cigarettes and a newspaper for the football pools. The shop was just around the corner in Granby Street, and although the was little real income, it gave us a roof over our heads and a modest amount for food.

My parents both worked hard cleaning up the rather shabby shop, and both then worked in it daily. I don’t remember the number in Granby Street, but it was not far from the junction with Arundel Street. Directly opposite was a “Mr. Wu’s Chinese Laundry”. I don’t think Wu was the owner’s name, but that is what we called it. From the front upstairs window, which I suppose was our living room, I spent many fascinating hours watching Mr. Wu steam-ironing customer’s clothes and bedding. He had a large jug of (presumably) water. He would fill his mouth with the water and spray the laundry items before applying the heavy flat iron! I was also able to observe the “Soup Kitchens”, often wheelbarrows, offering free portions of soup to anyone in need. They were often manned by the Salvation Army (“Sally Ann”) or other charitable organisations.

Farthings were still legal tender at that time, and Dad got many in the shop. He would give me a few farthings and I would play “shop” in the back yard with friends. However, when my friends increased in number, and the number of young boys entering the shop to buy sweets with farthings also increased, a stop was put to my “shop”, as the farthings were obviously being recycled. This shop helped us survive the depression years and in 1933 we moved back to Leeds, where my parents ran a very successful shop in Alwoodley, a posh leafy suburb of Leeds.

Many thanks go to Derek for this insight into the history of Toxteth, and what it was like to play in its streets decades ago. This is a beautifully written account, filled with things you just won’t find in a history textbook.

If you’d like to read more like this, or you want to respond to these memories, the comments are open below. If you’d like to contribute your own stories about Liverpool history I’d be very pleased to hear from you.