You should be redirected automatically in a few moments, but if not, please click here to see if Five fossils of Liverpool’s founding year has made the transition. 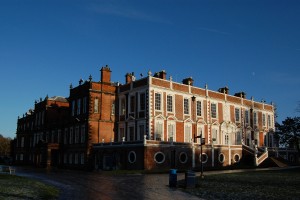 On August 23rd Liverpool celebrated 804 years as a town! OK, so it’s no ‘2007’, but it’s a good time to have a look back the best part of a millennium. There are quite a few things which were laid down in 1207, the evidence of which is still visible today.

Every historian of Liverpool should know about these:

They are the original roads laid out when Liverpool was founded in 1207, and this H-shaped plan remained generally unchanged until the 17th century. It remains the heart of the city today.

The original houses which occupied these streets were burgages, a combination of a building which acted as both home and business for the burgesses who occupied them, along with a long back yard, used for growing food and carrying out whatever trade the burgess engaged in. Houses on Dale Street had yards backing onto the Pool (now Whitechapel), and when you sit in the beer garden of Rigby’s, you’re on the spot of a 13th century burgage, the town model which helped Liverpool become the mercantile city that it did.

Although the building at the bottom of Chapel Street is not the original structure, a place of worship has sat on this site or close by since King John granted its charter.

It would have been unthinkable to found a town without a chapel, and so that of Mary del Key (Quay) was built on the river front to care for the souls of Liverpool, not long after the town was founded. As Liverpool expanded there inevitably came a time when the population outgrew the chapel, and a larger church was built, of Our Lady and St Nicholas.

Until 1699 Liverpool fell within the parish of Walton-on-the-Hill, and so St Nicholas was not a parish church but rather a chapel of ease within Walton. It was in the 16th and 17th centuries that Liverpool was becoming too proud to accept this place in the hierarchy, and a petition was begun to gain parish status. It was in 1699 that this status was gained, and St Nicholas’ became the parish church along with St. Peter’s in Church Street, which served as Pro-Cathedral in the Angican diocese.

So despite a succession of rebuilding and expanding, the church St. Nicholas’ represents a long history of worship on this ancient waterfront site.

A ‘strand’ is a long strip of land, such as a beach, which stretches along a coastline. This name survives in the road behind Liverpool’s docks as a reminder that, when Liverpool was founded, everything on the west of this line was in the River Mersey.

The first ships to use Liverpool as a port loaded and unloaded their cargoes at a jetty or pier in the Pool, the inlet which ran along the line now occupied by Liverpool ONE, Paradise Street, Whitechapel and Old Haymarket. The Pool was tidal, and so boats rose and fell along with it. Much of the time a boat would lay stranded on the mud at the edge of the Pool, waiting for the next high tide before it could sail again.

Thomas Steers’ Old Dock, Liverpool’s first wet dock, was built in the middle of the Pool, which was drained and developed into a rectangular quayside. From this central location, new docks were built north and south, and out into the Mersey (to build too far away from the centre of town would have been a poor commercial decision). Waterfront locations like St. Nicholas’ Church and the Tower eventually found themselves behind an expanse of reclaimed land, and the ‘strand’ was no more.

However, the name lives on, and gives a clue to part of the original shape of the banks of the Mersey.

West Derby is another place name which acts as a reminder of how things once were. Medieval West Derby village was the centre of the West Derby Hundred, a large subdivision of Lancashire which stretched from the Mersey itself up to the Ribble at Preston.

It was a powerful centre, to such an extent it had to be named ‘West’ Derby to distinguish it from the Derby in Derbyshire. It remained powerful for some time, having a castle from soon after the Norman Conquest, as well as a court house and a stately home in the form of Barrett’s, later Croxteth, Hall.

The location of West Derby is also telling. Before Liverpool was founded Merseyside was generally an out-of-the-way place, covered in bogs and mosses. A Roman road crossed the Mersey at Warrington on its way to Lancaster, but the evidence for Roman contact west of this line is sporadic. The banks of the Mersey were probably populated with a scattering of manor farms (and perhaps Liverpool itself was one of these). West Derby’s relative importance was due to its position on slightly raised, drier ground, as well as being more accessible from the important routes linking Cheshire and the Midlands with northern Lancashire and Cumbria. The location which prevented anything forming in Liverpool before King John made a special effort also meant that West Derby, closer to the action, rose to prominence centuries earlier, and without royal patronage.

For the first several hundred years of Liverpool’s history it was a small town which occupied the space between the east bank of the Mersey and the north edge of the Pool. Beyond the Pool was the Waste, and beyond this Toxteth Park.

Toxteth Park, like West Derby to the east, was an important area from the Medieval period. Monarchs used the area as a hunting forest when travelling in this part of the world, and it was just one part of a large area of forest stretching to West Derby and Simonswood in the north east. Until the 18th century Toxteth Park remained a place isolated from Liverpool and the rest of civilisation, and it was reached from the town via a road across the Pool – Park Lane.

In later centuries Liverpool would imitate the more fashionable towns such as (primarily) London, Bath and Bristol, and so adopted some of the building styles and road names of these other towns. Hence Liverpool now has Pall Mall, Whitechapel, Kensington and Covent Garden. However, Park Lane, which looks like another one of these nods to the capital, is a ‘native’ fossil of how the town used to look.

Other fossils from history

I want to hear your suggestions now – what little details can you see in the historic environment that point to interesting bits of Liverpool history?

If you want to find out more about the land reclaimed beyond the Strand, then Graeme J Milne’s book, Trade and Traders in mid-Victorian Liverpool covers everything from the building of the docks to the social impacts of Liverpool’s expansion. It also covers the workings of the dock system, including the elected Mersey Docks and Harbour Board.