Who’d be a Scouser?

You should be redirected automatically in a few moments, but if not, please click here to see if Who’d be a Scouser? has made the transition. 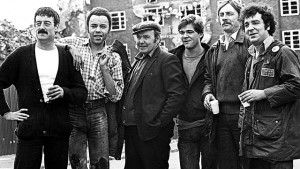 I’ve recently started reading Candles, Carts & Carbolic: a Liverpool childhood between the Wars by J. Callaghan, which is rapidly becoming my favourite out of the many first hand memoirs of living in Liverpool in the last two centuries.

The most striking thing so far has been the throw-away statement that the term ‘Scouser’ was a derogatory one. Scouse was a thin stew made from the cheapest cuts, and was therefore inferior to ‘real’ stew, and eaten out of necessity rather than choice.

Although I think we’ve all been called ‘scouser’ in derogatory way in our lives, it’s usually by outsiders, and we’re all proud to be called Scousers these days. So it set me wondering: when did things change? and are there similarities with other terms for locals?

Having done my research for my book I can tell you that the preferred term for Merseysiders in the city’s Victorian heyday was ‘Liverpolitan’, with hints of the great metropolis of London in the word. A Liverpudlian was a lower-born member of the great unwashed, if the word was acknowledged at all.

Our old friend Wikipedia tells us about the following origins:

It’s fair to say that all these labels have been proudly adopted by those people they originally ‘targeted’, scouser being no exception.

J. Callaghan would have been 100 years old in 2011, and so I want to know whether any of you reading this can also remember a time when ‘scouser’ was a put-down within Liverpool, between her inhabitants. Perhaps this was more common when social status was more important, and more discussed, than it is these days. Is it restricted to the inter-war period, covered in this book, or is it later too?

I wouldn’t be surprised if it reared its ugly head in the 1980s too, when Liverpool was at its low ebb.

Anyway, that’s just this short post for now. Please do comment below if you have memories of when being a scouser was bad!