You should be redirected automatically in a few moments, but if not, please click here to see if Churches, and Rural Landscapes in Urban Liverpool has made the transition. 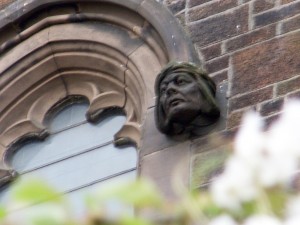 This article was inspired by Celia Heritage’s recent article on parish churches. Her love of churches, in terms of history, began through researching family history and looking for ancestors’ gravestones.

What to look out for in a parish church

What to Look Out For in a Parish Church is the first article on the revamped Celia’s Blog. The article is a really interesting run-through of the oft-missed aspects of church architecture and archaeology and those features which any observant onlooker can spot.

Find out why ground on the south side of a church is often higher than that on the north; the origins of stone crosses in churchyards; and what activities (other than burial!) took place in the yards.

As well as churchyards, Celia talks about the fabric of the church itself, how the builders might use whatever materials were close to hand, and how this gives us clues as to the earlier archaeology of the area. She then talks about the inside of a church, how to date churches by their features, and how internal layout has changed over the years (or not!).

The Reformation had some major impacts on a church’s role as a centre of worship and the running of the parish. I won’t reveal any more – you really should go an read the article in full. I’m looking forward to part 2, when Celia will delve in more detail into the parish church of Thornham Parva, Suffolk.

But what has all this to do with Liverpool? Of course, Liverpool has its own fair share of parish churches, with St. Nicholas becoming the parish church (after 400 years as a chapel under Walton-on-the-Hill) in 1699. Many other churches were built in Liverpool as the city population grew, and particularly as the range of religious beliefs diversified. Welsh, Scottish and Scandinavian churches are all famous features of the Liverpool landscape, as are non-Christian houses such as Britain’s first mosque and the amazing synagogue on Princes Road.

But the link to Celia’s article comes from the fact that many more churches, including Walton parish church, existed before Liverpool absorbed them in new suburbs in the 18th and 19th centuries. In many cases the church and its surroundings remain fossilised within the urban structure, and teasing them apart from more modern roads and buildings can give clues to the history and origins of the village.

The fabric of All Saints’ Church, Childwall contains features from the 14th century, as described by the project to restore and extend the building. The shape of the churchyard is also suggestive of a 14th century origin.

St. Mary’s Church in West Derby is the successor to a chapel which stood in the centre of the village until around 150 years ago. Along with the manor house (now Croxteth Park), the court house and the castle, this close association of these types of buildings is a classic of medieval power structure, where the local lords would exert control over the manorial, military and spiritual structures of the area.

It’s not just medieval landscapes, either. The cast iron church of St George in Everton was built on the site of the Everton Beacon, and holds great views over the Mersey. It’s very structure made a statement about Victorian Liverpool, and the promise of new technology (cast iron) over the old (stone). It was a demonstration of engineering and the men who sponsored it, much like that of Iron Bridge in Staffordshire.

Every church tells a story if you look hard enough. Do you know of any other Liverpool churches which have a special, or revealing, feature? Share in the comments, and have a look at recommended reading.

hurches in the Landscape by Richard Morris (left) tells you everything you need to know about where churches are located. It talks about the communities in which the churches stand, as well as the landscapes themselves. It’s a chunky book, but written in a clear style, and very easy to read. If you’re after a shorter book on church archaeology, and churchyards, Shire Publishing dedicates one of its guides to the topic, in Medieval Church and Churchyard Monuments by Sally Badham (right). In contrast to the Morris book, Badham’s takes in effigies, statues and sculpture to help guide you around your local (or any other) parish church history.