You should be redirected automatically in a few moments, but if not, please click here to see if Lerpoole 1572 has made the transition. 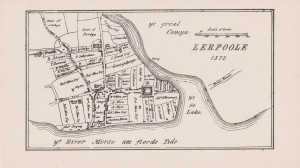 My favourite thing about this map is its ‘obviousness’ and clarity. To a landscape archaeologist, this map of Liverpool is such an easy model to read. For a start, the Pool itself – “Ye Se Lake.” – is there, centre stage. We know straight away where the small town gets its name. 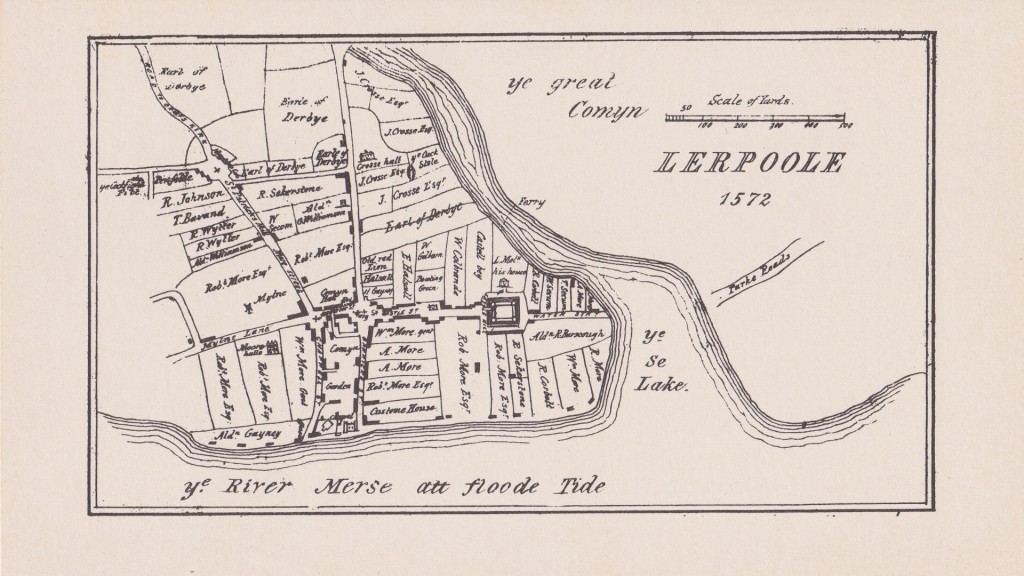 For those of us who know Liverpool’s past, our eyes are drawn to the two centres of gravity of the land: Liverpool Castle and the H-shape of the original Seven Streets. The Castle enjoys its perch on the high rock above the pool, defended on three sides by water; the Streets form a hub to one side. The centre of power, and the centre of life, Castle Street joining them.

The fields and roads of Liverpool

The fields which fill most of the space run off the roads. This is a human-scale town where each plot has its own address. This is long before the era of hundreds of people packed into each square mile. Each field is labelled with its owner, and we can see quite a few familiar family names: More, Earle of Derbye (the Stanley family); Burscough; “L. Molyneux his home”; Crosse. No doubt if you lived in Liverpool in 1572 you would know each and every other name, and the faces which went with them. The rich rubbed shoulders with the poor in the 16th century, although some of the streets were more desirable as residences than others.

We can also see the Crosses at the junctions of the Seven Streets and at the beginning of the Road to Ormskirk. Other notable landmarks are the town mill (“Mylne”), the Crosse Hall, the chapel (St Nicholas’ Church on the water front), the Pool Ferry and intriguingly, “Ye Duck Stole“. There is also a decent amount of small green spaces in the town, though perhaps not all used in the modern leisurely sense. We have two ‘Comyns’, a Garden and a Bowling Green. Plus we have what looks like the town’s only pub, the Old Red Lion on Dale Street near to the junction with Castle Street. No doubt there were other public houses at this time, which didn’t own extra plots of land.

Less than meets the eye?

Having looked across this map a lot in the writing of this article, it’s starting to strike me that this old thing is not all it appears. The person who asked me for a scan wanted as old a map as I could find which would show her the original street names. But look closely, and there are problems with this map as a source. Water Street sensibly runs down to water, but it’s the Pool at it’s foot, not the Mersey. There’s something that seems to read “Barrier Street” where we might expect Water Street to be, or in former times, Bank Street. Are these oddities little-known variations on the commonly-known street names?

The map was not produced in 1572, but is a 19th century reconstruction from “unspecified ‘ancient sources'” as the Liverpool Packet (which includes this map) puts it in its notes. So why doesn’t this map agree with other 19th century sources? Perhaps it was laziness, misunderstanding, which led a low-paid map scribe to fail to check the position of Water Street…

Still, it’s a beautiful etching, handwritten labels and tide-lines included. It’s a way in to imaging Liverpool in its formative years, when the rapid expansion of later centuries was not on the radar, and was indeed not by any means inevitable. It’s later success depended on the actions of its inhabitants, and the foundations of the town – and the families who inhabited it – were already laid in the 16th century as demonstrated on this little map.