You should be redirected automatically in a few moments, but if not, please click here to see if Lunt Meadows: new Mesolithic settlement found has made the transition. 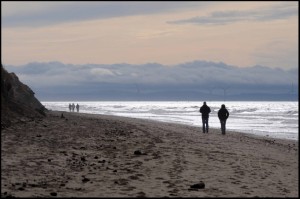 The big news in Merseyside archaeological circles this week is the discovery on Lunt Meadows of a possible Mesolithic settlement. Ron Cowell has been leading an excavation there on behalf of the Environment Agency.

By looking at the types of stone tools found, and analysing the layers of soil from which the tools were extracted, the team of archaeologists have been able to determine that the remains are around 8000 years old. This was an age when (it was thought) humans lived in small bands, moving from camp to camp with the changing seasons, taking advantage of the coastal areas in winter, and moving further inland during the summer.

It’s this movement between different environments, and the methods used to gain food, which are characteristic of the ‘hunter-gatherer’ way of life. But the results of the excavation bring in to question just how mobile these people were.

The light huts in which hunter gatherers would have lived while at a temporary camp leave next to no trace in the archaeological record, and yet Ron’s team have found evidence of three much more substantial buildings, three structures around 6 metres (19 feet) across, leaving a very definite series of post holes in the sand. As Ron says on the Inside Out North West film linked to below, this suggests a much more permanent place to live, an extremely rare example of supposedly ‘nomadic’ hunters settling down.

For anyone familiar with the basics of Mesolithic prehistory this is hugely exciting, with the potential to re-write the history of the area. But as locals know, this isn’t the first bit of ancient activity known from Merseyside.

Not far from Lunt Meadows, in the dunes which stretch along the Sefton coast, Mesolithic footprints were fund 20 years ago, preserved in the layers of sand and rock. The footprints are unique as they show the immediate effects on the landscape which people had merely by inhabiting it.

There are a child’s footprints next to an adult’s, created no doubt as the two walked hand-in-hand along the beach. The coastline may have been further out in those days, but this was still part of the coastal plain. Was this walk following a swifter-moving hunt? Was it a trip to gather food from the bushes here, or was it simply a stroll on a sunny day? Though we’ll never know, footprints are somehow such an immediate record of a human passing by.

Ron Cowell has been digging prehistoric sites in Merseyside and beyond for 30 years, and in the film we see him suggesting that he’d “been looking for this kind of site for quite a long time”. However, looking at his other digs is essential for getting the full picture about the prehistory of Merseyside.

The beauty of this area in the Mesolithic was that it had access to a range of different mini-environments, which meant a range of resources. There were fresh water streams in the form of the Alt and Ditton, alongside the salt water of the Mersey Estuary and the Irish Sea. This meant access to different types of sea food (fish, shell fish, water fowl), as well as the supply of fresh water.

The river channels also gave easier access inland, while the rest of the landscape could be covered in woodland. This woodland, however, provided other sources of food, in the form of nuts, fruit and the animals which roamed there. Ron mentions wild cattle in the film, and there may also have been boar and deer for the taking. These people had fairly sophisticated tools, hewn from Welsh chert, and some local stone, possibly washed up by the tide.

It’s a great and rare thing when a new site hits the headlines, especially one of such important as Lunt Meadows. Liverpool is not known for its prehistoric archaeology, and yet the Field Unit at the Museum of Liverpool could tell you just how much stuff is there, if you know where to look. Combined with the rest of the prehistoric sites on Merseyside the new settlement adds another dimension to our understanding of how people inhabited the landscape so long ago.

The photo at the start of this article is ‘Evening Stroll, Formby Point‘, released under a Creative Commons license by stephoto27.

The film on Inside Out North West is available on the BBC iPlayer until 26th November 2012.

A detailed account of the excavation results is in an article by Maeve Kennedy for the Guardian: Stone age nomads settled down in Merseyside, flints and timber suggest.