You should be redirected automatically in a few moments, but if not, please click here to see if Knott’s Hole and the Garden Festival Site has made the transition. 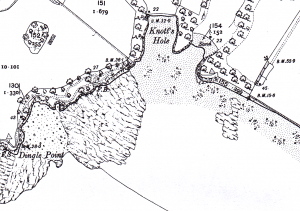 Knott's Hole, from the Ordnance Survey Edition of 1908

The former site of Liverpool’s historic Garden Festival was back in the news again in February, as work gets under way to restore the parkland and kick-restart the building of flats on the site.

This is just another phase in the varied life of this part of the Mersey waterfront, and so in a similar way to the township pages on Historic Liverpool, I brought out a few maps and looked at Dingle through the last 160 years. What I found was a pretty part of town – a real beauty spot – subsequently filled with rubbish and contaminated with oil, then rescued somewhat in the late 20th Century.

Perhaps the new developments will do more than previous ones to restore the pleasant air of Knott’s Hole, but I think you’ll agree that something special was lost long ago.

Dingle Point in the middle of the 19th Century

As readers of Historic Liverpool may know, the earliest Ordnance Survey maps for Liverpool were drawn around 1850. 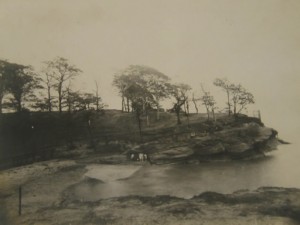 Knott's Hole, where the Dingle flowed into the Mersey

At this time the Dingle area was purely rural. Liverpool lay to the north west, but this was an area of large houses, vast gardens, babbling streams and a long beach.

The large houses included West Dingle, the Priory and Dudley House, which sat back from Aigburth Road along narrow lanes. The beach was known as Jericho Shore and stretched from Knott’s Hole in the north west towards Garston in the south east. Knott’s Hole itself was a narrow bay or inlet next to where the Dingle flowed out to the Mersey. On either side were steep rocky cliffs, with Dingle Point to the south west.

By the time of the next map, published in 1894, Herculaneum Dock had appeared to the north, marking the continued expansion of the docklands across the Toxteth waterfront.

Along with this came rows of terraced houses to the north east of the docks, and two hospitals had been built just inside the County Borough Boundary.

The lanes down which the large houses sat had developed into a more formal settlement – St. Michael’s Hamlet, including Alwyn Street, Allington Street, Belgrave Street and St. Michael’s Road. The Jericho Shore remained a wide beach.

Urbanisation in the 20th Century

With the increasing urbanisation of the area, by 1928 the stream known as the Dingle had been surrounded by allotments and the area had become quite an orderly part of the grounds of West Dingle, the large house on the hillside.

Dense terraced housing was filling in the gaps not already taken up by the large villas, as Toxteth and Liverpool slowly encroached on the rural outskirts.

It’s on the 1928 map that the south pier at Dingle Point is marked, and it is this structure which heralds the start of a complete transformation of the landscape, and one which we still look upon today. 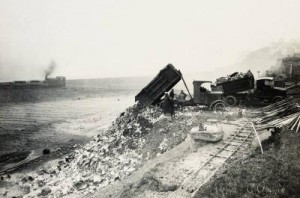 The first development was an application which was submitted to Liverpool City Council for the dumping of material dug from the Queensway Mersey Tunnel along the river front. It was then that 20-year-old plans to reclaim land from the river were resurrected, and the filling of the land began. In September 1929 thousands of tonnes of rubble and household waste began to be dumped.

By the time of the 1949 map, a handful of gas storage cylinders had been built behind the pier. This area of the south docks was gradually becoming more and more industrialised, and what had once been a popular fishing destination now found its waters contaminated with oil, andits fish stocks disappearing.

More gas storage cylinders were built in the period up to 1960. Extensions to the promenade (which had opened in 1950) were being made northwards, and the long beach of the Jericho Shore was being reclaimed for building land. The 1960 map shows the Otterspool river wall creeping northwards in preparation for the promenade extension. By 1964 the beach had totally disappeared, and the area was marked as Sand & Gravel.

By the late 1970s the sand and gravel too had gone, along with the gasometers. The railway remained, as did the pier, but nothing more than an embankment marked the area once covered with allotments and cut through with the channel of the Dingle. By the 1980s the whole are had been filled with household waste.

Unemployment, Riots, and a Garden Festival

This period was a low point in Liverpool’s history. The docks were falling empty as trade moved elsewhere. At the beginning of the 1980s the Toxteth riots had put the eyes of the country on to the social and economic problems in the inner city.

For this reason Michael Heseltine, Margaret Thatcher’s ‘Minister for Merseyside’ ushered in another new use for the Dingle. The International Garden Festival took place in 1984 in an attempt to showcase what Liverpool could do when it pooled its resources, and to spark regeneration in the area. Whether or not this was a success, it completely reshaped the landscape.

The area recently landfilled was developed into extensive gardens. Where the shaded bay of Knott’s Hole once looked out on the Mersey, the Garden Festival Hall provided the focal point for the event amidst the lakes, statues and artworks. Then the Festival ended, and once again the Dingle waterfront fell into disrepair. 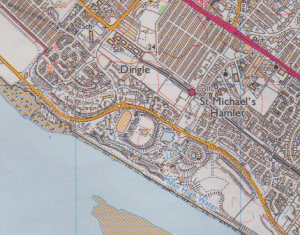 The derelict Garden Festival site in 2000

The years from 1984 until the turn of the Millennium were ones of little change. As planned, new housing was built in the area to replace the dense terraces built in the early 20th Century. A new waterfront drive took drivers quickly from Garston to the city centre, past the high fences and trees of the former Garden Festival site.

In the mid 1990s Pleasure Island occupied the site, which meant a new use for the Hall and the Gardens themselves until the centre closed in 1999.

Campaigns have run to help preserve or save the Garden Festival site from ruin or unsympathetic development. Finally in recent months plans have been submitted and accepted to build new houses and, more importantly, parkland on the site. So perhaps what began history as a secluded beach surrounded by the genteel houses of the wealthy will enjoy new life in the 21st Century as a green space for the people of Liverpool to enjoy.

The following sources were used to research and write this article:

Yo Liverpool – a great source of photos from its members: